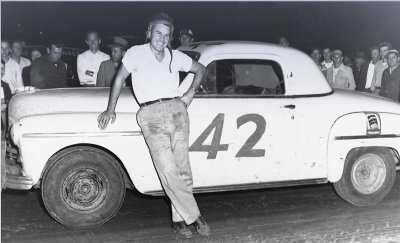 Lee Petty's son Richard may have put NASCAR in the national spotlight, but Lee was a NASCAR great in his own right. See more pictures of NASCAR.

NASCAR's early days were frolicking and carnivorous, but Lee Petty was a refreshing, out of the ordinary member of NASCAR's wild bunch. Petty was never regarded as one of NASCAR's hardest chargers. Instead, he was the great calculator, applying the strategies of a chess player.

Petty drove to finish -- and to finish well. An opportunist, Petty ran well enough to become NASCAR's most prolific race winner when he finally hung up his goggles for good in 1964. In his career, he won 54 times, and finished in the top 10 an incredible 332 times in 427 career NASCAR Grand National starts. It is a record of consistency that may never be approached.

Petty won the NASCAR championship three times, in 1954, '58, and '59. During the heavy factory participation in the '50s, Petty's independent team lacked the pure speed of the industry-supported outfits, yet he still racked up more than his share of victories.

In '58 and '59, Petty won 18 races and finished second 10 times. He led the NASCAR National points standings virtually all the way for two years running, holding the top spot after 92 of the 95 races -- another record that may never fall.

"We were not like some of the others," Petty said several years after his retirement. "Some of the other boys, they drove and took everything out of racing they could. We have put it back. When a sponsor quit, some of the other boys quit. They spent their money for pleasure. We spent ours to build. Everything we've done has been aimed at racing. We started under an ol' reaper shed with no floor in it and we built it up. That was probably what I was most proud of."

Petty was born in Greensboro, N.C., and enjoyed all sporting activities. "Played basketball, football, anything competitive," Petty said in a 1970 interview. "That is what I like about racing. It just caught my fancy because it was competitive. I got into it as a hobby first and just stayed with it."

Petty was one of the 33 participants in the inaugural NASCAR late-model event on June 19, 1949. He drove a huge Buick Roadmaster, a car Petty claimed "me and some buddies had gone in on together." In the race, Petty lost ­control and flipped. The car came to a halt in a battered heap, wheezing steam and oil. Petty climbed out, shaken but uninjured, sat on the track, and peered into the distance dejectedly.

In one of racing's grand quotes, Petty recollected his feelings at that moment: "I was just sitting there thinking about having to go back home and explain to my wife where I'd been with the car."

"Pappa" Lee decided that the Buick was too heavy and bulky for the tight corners of most of the short dirt-track speedways. He opted to build a lightweight Plymouth with more user-friendly handling characteristics. He scored his first career win at Heidelberg, Penn., in the 1949 season, and registered at least one win each year in his first 13 seasons of NASCAR Strictly Stock and Grand National competition.

Petty was one of the few pioneer drivers whose career made it to the progressive 1960s. He was able to ride the bumpy transition from the dusty bull rings to the lightning-fast superspeedways. When the Daytona International Speedway opened in '59, Petty drove an Oldsmobile to a two-foot victory over Johnny Beauchamp. With no photo-finish camera in place, NASCAR officials took three days to declare Petty the winner in the thrilling side-by-side finish.

Two years later, Petty and Beauchamp hooked bumpers in the closing stages of Daytona's 100-mile qualifying race and both sailed over the wall. Beauchamp was treated at a hospital and released. Petty was gravely injured.

Petty's electric blue Plymouth landed in a smoldering heap outside the Daytona track. His injuries included a punctured lung, multiple fractures of the left chest, a fractured thigh, a broken collarbone, and numerous internal injuries. He was in the hospital from Feb. 26 until June 17.

Petty buckled his helmet for just six more races after his Daytona accident. In his comeback appearance at Martinsville in the Virginia 500 on April 22, 1962, the old master finished an impressive fifth on the 1/2-mile paved oval. He also had two other top 10 efforts before bowing out for good. "I drove again just to prove I wasn't scared," Petty quipped.