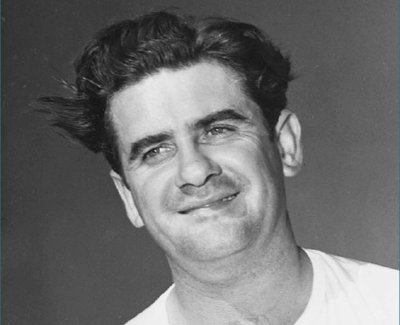 Buck Baker's hard-nosed approach to racing earned him the respect of the NASCAR circuit. See more pictures of NASCAR.

"Buck" Baker -- born Elzie Wylie Baker -- was one of the toughest and most capable high-speed NASCAR chauffeurs of the 1950s. A hard-nosed competitor in the rough-and-tumble Modified division, Baker won his share of battles on the racetrack, and compiled an enviable record in postrace fisticuffs.

During the progressive 1950s, Baker was active in all branches of the NASCAR racing tree. He divided his time between the tumultuous short tracks and the popular NASCAR Grand National circuit -- and also took time out to win the championship for NASCAR's short-lived open-wheel Speedway Division tour in '52. A driver held in high esteem among team owners, Baker became a sought-after pilot when he wasn't campaigning his own machinery.

In 1955, Carl Kiekhaefer joined the NASCAR touring series and virtually cleaned house. Kiekhaefer's team won 22 of the 39 races, leaving only scraps for the other shade-tree-engineered teams. Kiekhaefer noticed, however, that Baker was giving the Kiekhaefer outfit a good run for the money in his self-owned Oldsmobiles and Buicks.

"I saw that Buck was my top competition," Kiekhaefer said at the beginning of the '56 NASCAR Grand National season. "There is only one thing to do with a man like that -- hire him!"

Baker won his first start with Kiekhaefer in a 150-miler at Phoenix's dirt track. It set the stage for the remainder of the campaign as Baker won 14 races and captured the 1956 NASCAR Grand National title. He finished in the top five in 30 of his 48 starts.

Kiekhaefer suddenly quit NASCAR after the 1956 season, and Baker found himself in a factory-supported Chevrolet under the direction of Hugh Babb. Baker continued his hot streak, though, winning 10 races and only finishing out of the top 10 twice in his 40 starts. He also racked up his ­second straight national driving championship.

In addition to his two championships, Baker won the storied Southern 500 at Darlington three times. The first came in 1953 in an Oldsmobile owned by T.C. Griffin, when he scampered past a fading Herb Thomas in the closing stages. In '60, he filled in for Jack Smith, who refused to drive at Darlington after he soared out of the speedway in an acrobatic, aerial chiller in the '58 race.

As a substitute, Baker wheeled Smith's Pontiac to victory in dramatic fashion. He finished the race on three wheels, throwing up a shower of sparks after blowing a tire with two laps remaining.

Baker's final superspeedway triumph came in 1964 at Darlington, driving a Dodge for master mechanic Ray Fox. It turned out to be the final win of his career, but even at the age of 45, he proved he hadn't lost the edge.

A versatile driver who could hop in unfamiliar machinery and get the most out of it, Baker won races in eight different makes of cars: Hudson, Oldsmobile, Buick, Chrysler, Chevrolet, Ford, Pontiac, and Dodge. He also won for eight different team owners: B.A. Pless, T.C. Griffin, Ernest Woods, Kiekhaefer, Babb, Smith, Fox, and himself.

Not only versatile, but tough as nails, many of Baker's rivals said if they laid a bumper on him during the heat of battle, they could expect a confrontation in the pits afterward. "My dad won his share of races on the track," said Baker's son Buddy years later, "but I don't think he ever lost a battle in the pits."

Baker retired as a full-time driver from NASCAR Grand National competition after the 1968 season and concentrated on the pony league Grand Touring Series, which featured Mustangs and Camaros. He was a front-­runner in that series too, winning eight times in four seasons.

After kicking around the short tracks throughout the Carolinas, Baker got restless and wanted to test the big-league waters one final time. In 1976, Baker struck a deal with team owner Junie Donlavey to make his return at Darlington for the April 11 race. After qualifying 13th, Baker went on to finish in sixth place, not bad for a battle-weary 57-year-old veteran.

During his career in NASCAR Grand National racing, Elzie Wylie Baker competed in 636 races, won 46 times, and was the first driver to exceed $300,000 in official career earnings.

What is a stock car?
Why is a NASCAR race car called "loose" or "tight?"
Why is camber so critical in NASCAR?