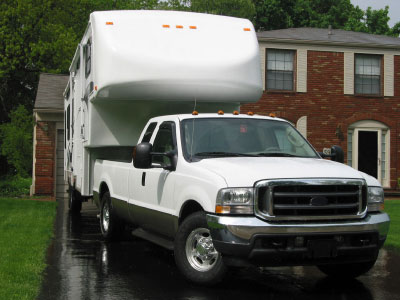 sebastian iovannitti/iStockphoto
When you're pulling a heavy load like this one, it's a good idea to know the tow vehicle's GCWR.

Some numbers associated with cars and trucks really aren't a mystery. In fact, they're pretty straightforward. For example, most everyone knows what fuel economy numbers are. Even horsepower and torque numbers are familiar to many these days. A vehicle's zero to sixty times are often mentioned when you're discussing a sports car, and if you're talking about a sedan, you might even be familiar with numbers that describe how much interior space that model has to offer -- numbers that describe the interior volume or the front and rear seat leg room. These numbers -- along with many, many others -- are important to understand when you're buying a car or truck. They clearly describe to you what you can expect to get for your money.

Even though all of these costs, statistics, weights and measures are published, or somehow available to consumers, there are still a few numbers that cause some confusion among new car and truck buyers. Truthfully, most people don't even know what some of these numbers really mean, or the consequences of ignoring them. One example is a vehicle's gross combination weight rating, or GCWR.

If you're ever planning to tow a trailer with your vehicle -- whether it's a car, truck or SUV -- you should be aware of your gross combination weight rating, so you should probably start by learning the definition of a GCWR. A vehicle's GCWR is a specific weight determined by the manufacturer to be the maximum weight of a loaded tow vehicle and its attached loaded trailer. The total weight of the tow vehicle and trailer should never exceed the manufacturer's listed GCWR [source: Ford Motor Company].

Similar to a vehicle's gross vehicle weight rating, or GVWR, the gross combination weight rating is a specific maximum weight limit determined by the manufacturer. The major difference is that the GCWR takes into account two individual (yet attached) vehicles -- the tow vehicle and the trailer. However, the gross combination weight rating definition doesn't really state how the weight rating is calculated. According to Ford Motor Company, the GCWR is calculated by adding the following weights together: The vehicle's listed curb weight, allowable payload, driver and passenger weight and trailer weight [source: Ford Motor Company].

It's important to remember that the GCWR is not an actual measurement of the weight of a tow vehicle and a trailer, but rather the combined maximum weight limit that the manufacturer has set for the two vehicles once attached.

The primary reason for setting a GCWR for any vehicle is safety. Overloading a tow vehicle or a trailer is dangerous enough. Overload both and you've really got a problem. Not only is a heavy load difficult to control on the road, but several other components could also be at risk. For example, the braking systems may overheat and fail, reducing or even eliminating the possibility of safely slowing or stopping your vehicle. The tires may not be able to handle the extra load, potentially causing a blow out situation. The engine and transmission in the tow vehicle may overheat due to the added strain, causing a mechanical failure. Components within the tow vehicle or trailer's suspension system could bend or even break, causing you to lose control on the road. The truth is that a variety of problems could result from overloading. Again, you should never surpass your vehicle's GCWR.

If you're going to tow a trailer, it's a smart move to play it safe by learning your vehicle's GCWR. Where can you find this information? Typically, it can be found on a label inside the vehicle's door frame, near the area where the driver's door latches. Another option is to search for the information on the Internet. Most manufacturers will publish this and other important vehicle information online.

The chart on the next page may be helpful as well.

Depending on the make and model year of your car or truck, you may be able to find your vehicle's gross combination weight rating, or GCWR, on the following chart.