It's the (relatively) age-old question: horsepower or torque?

For decades, man has debated over which of these measurements of a car engine's power output is more important, has more of an impact on everyday driving, and is more worthwhile when buying a vehicle. What's the difference, anyway? Horsepower provides highway passing power when your engine is revving hard, allowing you to accelerate at high speeds, while torque gives you low-end power and the ability to move quickly after stopping. In other words, torque lets you do the work, but horsepower lets you do the work quickly.

Torque enthusiasts love the low-end grunt and pull that big engines provide; they're drawn to brawny cars like the upcoming Chevrolet Camaro SS, whose V8 engine has 408 pounds-feet of torque, giving it plenty of pull at a stoplight. Those who like the highway acceleration that horsepower offers could choose a car like the Honda S2000, which has 237 horsepower at the rather high 7,800 revolutions per minute (rpm), but only generates 162 pounds-feet of torque -- not a huge amount.

These cars may go very fast, but otherwise, they don't suit the day-to-day needs of the average driver. Most of us won't ever put our cars on a racetrack or a drag strip, and the continuing volatility of gas prices makes having loads of either horsepower or torque seem downright impractical. However, there is one area where driving with plenty of power can have practical applications -- towing. Whether you're hauling a construction trailer for work or taking your boat to the lake for the weekend, you need a vehicle that has power enough to tow your load comfortably and safely.

­So, what is more important for towing -- horsepower or torque? In this article, we'll find out the answer to that question and discuss the impact that each one has on your choice of truck.

­Let's lay down the basics. Horsepower is a measurement of work, meaning a force ap­plied to an object and the displacement of that obj­ect in the direction of the applied force. What does this mean? One horsepower equals 33,000 pounds-feet per minute (4,562.41 kilogram-meters), or the energy it takes to move a 330-pound (149 kg) object 100 feet (30.5 m) in one minute.

Torque is a twisting force that rotates or turns an object, like a wheel. When you use a lug wrench on a bolt, you're applying torque to it. Unlike horsepower, even if the object doesn't move, torque can still be exerted on it. Torque is measured in pounds-feet, meaning a force in pounds acting on the end of a lever measured in feet. For example, if that lug wrench is 2 feet (0.6 m) long, and you put 100 pounds (45.4 kg) of force on it, you are putting 200 pounds-feet (27.65 kg/m) of torque onto the bolt. Read How Force, Power, Torque and Energy Work for more information on torque.

Once we're able to measure torque, we can then measure horsepower. The formula is simple: Multiply torque by the engine speed (measured in rpm), then divide that by 5,252 to get the horsepower at that rpm level. In other words, to get the horsepower of a vehicle generating 350 pounds-feet of torque at 4,000 rpm, you would calculate (350 X 4,000)/5252, which equals around 267 horsepower. It comes down to this: torque measures how much work is being done and horsepower measures how fast that work is being done [source: Polk].

In the next section, we'll analyze torque's advantages when towing a trailer.

­Most drivers know that torqu­e translates into low-end power, or the ability to accelerate the vehicle at low rpm levels. Torque moves the vehicle from a stop and helps it get up steep hills. As such, more torque is required to start a heavier vehicle than a lighter one. That's why torque is useful when towing -- torque is what allows you to pull heavy loads. When you see car ads on TV, they often discuss horsepower figures for performance and sports cars, while you're more likely to hear about torque in truck commercials [source: General Motors].

A vehicle's towing capacity refers to the amount of weight it can pull behind it. Modern trucks like the Dodge Ram 3500 can tow up to a whopping 16,000 pounds (7,257.5 kg) - more than twice the truck's weight, which is about 7,000 pounds (3,175.1 kg) [source: Edmunds.com]. That towing capacity is related to the truck engine's torque. Your vehicle's engine creates torque and uses it to turn the crankshaft, which is connected to the transmission. The transmission gears convert this torque so that the vehicle can move and tow cargo safely.

If you tow often, you know to keep your vehicle in a lower gear than normal. For a five- or six-speed transmission, that means towing in fourth; on a four-speed, third gear usually does the trick. This is because there is more torque available in lower gears, which is why it's harder to accelerate from a stop or pass another car on the highway in the highest gear, no matter how much horsepower you have [source: Autotropolis].

Imagine towing a trailer up a steep hill. If you're in a truck like the aforementioned Ram, you've got a lot of weight behind you, so obviously you'll want to go slowly up the incline. As such, you'll be keeping your engine rpm low. Again, that's where torque comes in. Having lots of horsepower just won't help you when you need to tow an object at low rpm. For that, you need that low-end power that torque provides.

You've heard a lot about torque, but what about horsepower? What role does it play in towing? We'll explore that in our next section.

We've established that torque provides the twisting force that moves the vehicle along at a stop and at low rpm levels. But where does horsepower come in when you're towing?

As we discussed earlier, horsepower is what you depend on at higher rpm. It's what allows you to pass another car on the highway. When you're cruising along in your Honda S2000 and there's another car ahead of you that refuses to move, you can downshift, accelerate and speed past it. That's your horsepower working for you. As you accelerate, rpm levels rise, and that high-end power comes into play as you pass.

It's the same when you're towing. When you're driving your truck while pulling another vehicle behind you, you sometimes need to pass the slower drivers in front of you. When you accelerate and pull past the other car, you're putting your horsepower to work. In other words, if your engine doesn't have a ton of horsepower, don't expect to have an easy time of accelerating and passing when you're towing something behind you.

In the next section, we'll look at different types of truck engines, how they produce torque and horsepower, and which might best suit your towing needs.

It's no secret that most large commercial trucks and some heavy-duty trucks have diesel engines. Why? Diesel engines generate more torque. Since a diesel engine doesn't have spark plugs and uses compressed air to ignite fuel, the piston (cylinder) has to travel a longer distance to compress enough air for ignition. This cylinder travel distance is called stroke, and more stroke means more torque [source: Mason].

Let's look at the differences between two truck engines. A Dodge Ram truck with a 6.7-liter Cummins Turbo Diesel engine has 350 horsepower and 650 pounds-feet of torque. The same truck with a 5.7-liter Hemi gasoline V8 engine, on the other hand, has 383 horsepower and 400 pounds-feet of torque. See the difference? While the gasoline engine has a little more power, the diesel's torque completely blows it away [source: Dodge].

While the two trucks have very similar towing capacities --15,650 pounds (7098.7 kg) for the gasoline engine and 16,350 pounds (7416.2 kg) for the diesel -- all that low-end power means the diesel engine will have an easier time towing things. Keep in mind that the diesel Dodge engine gets that much torque at only 1,500 rpm, which is just above idle. With a diesel engine, you won't have to rev up to start towing because the power already exists.

Because you're using more energy-laden diesel fuel, diesel engines get better mileage than gasoline ones, so you'll also be able to tow longer without stopping. At the same time, a truck with a gasoline engine is going to have a cheaper base price. Diesel engines almost always cost more than gas ones because they are built to withstand greater forces from a more potent fuel. A vehicle's towing capacity depends on many of its components, including wheels, tires, suspension and transmission [source: Haulmark].

Typically, the bigger the towing job, the larger displacement engine you will need. Towing puts a lot of stress on the engine, so more torque will reduce wear and tear on the vehicle [source: Sunrise Trailer Sales].

We've spent a lot of time and bandwidth comparing horsepower to torque. What's the verdict? In the end, all the evidence points to torque as being more important than horsepower when it comes to towing. Why? The power at low-end rpm provided by high levels of torque lets you move huge loads without much effort. As stated before, some diesel trucks produce twice as much torque as they do horsepower at near-idle RPM levels -- meaning that they can start pulling something like a trailer or a boat with ease.

Horsepower is important because it allows a car to move faster on the highway and at high rpm. However, if you can't get that trailer off the line, all the horsepower in the world won't help you.

For more information on the horsepower vs. torque debate, please see the links on the next page. 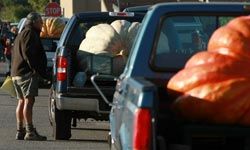 Up Next
How Payload Works
Explore More 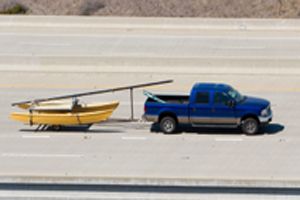 You May Like
How bad is it to tow more than my truck's capacity?
Explore More