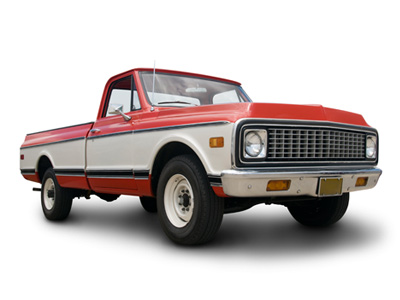 Half-ton pickups have outgrown their name -- now they can safely carry much more than just a half-ton.
iStockPhoto/Brian Sullivan

Once you've finally splurged to buy that boat you've always wante­d, it may strike you that it's not so smart to lug it around with the old family sedan. Maybe it's time to upgrade to a truck. The question is, "What kind?" Soon after you begin your search, you'll realize that shopping for the right truck can get confusing. When it comes to heavy duty towing and hauling, it's easy to get lost in the sea of terms and safety requirements. The real meaning of "half-ton" pickup, for instance, eludes some automotive folks, let alone first-time truck buyers.

But old habits die hard, and the name "half-ton" has stuck around to this day. It's still helpful as a general classification term, differentiating the group from the larger, heavy-duty three-quarter-ton pickups and one-ton pickups (also obsolete terms). A better way to find out the maximum payload capacity is to check the individual truck's specs online or in the owner's manual to see what the manufacturer recommends.

So, don't skip over half-tons because you think you need more capacity -- this name contradicts their real hauling power. Consumer Reports actually warns against buying a truck with more hauling capacity than you need because its higher-capacity suspension will make for a more uncomfortable ride [source: Consumer Reports]. It's also important to note that payload capacity isn't the same thing as towing capacity, which you'll need to consider if you plan to haul a boat or trailer. 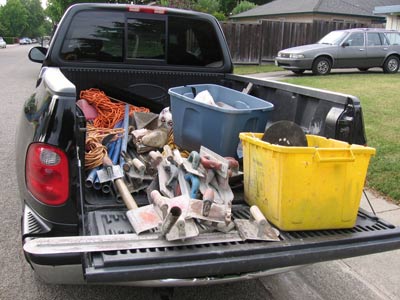 If you just plan to haul furniture or some tools around in your truck, a half-ton pickup will do fine.
iStockPhoto/Carol Mattsson

What's in a name? As we've seen, not much when it comes to half-ton trucks. It turns out that not only do half-ton pickups weigh and carry more than a half ton, they can also tow more than a half ton. Although "payload capacity" usually refers to how much weight a truck can carry in both passengers and cargo in the cab and bed, towing capacity refers to how much the truck can safely tow. Although different, these two parameters can affect each other. For instance, the payload can include the tongue weight, which is the portion of trailer weight -- usually about 15 percent -- that bears down on the truck's hitch.

Manufacturers often embellish the maximum towing capacity of a truck in advertisements. For instance, they often calculate this number by supposing that nothing is in the truck except for a 150-pound (68-kg) driver. In realistic situations, where the driver may be heavier, other passengers are in the cab and extra cargo is in the bed, the truck's actual towing capacity is lower [source: Edmunds]. In general, the more pounds in your truck's payload, the lighter your towed vehicle should be.

As if the half-ton-naming stuff wasn't confusing enough, towing capacity can be deceptive. By basing calculations on unrealistic situations and using whatever criteria they want, manufacturers can easily exaggerate towing capacity. This makes it increasingly difficult for consumers to compare truck towing performance. Although other performance criteria, like claims about horsepower, are standard across the industry, towing capacity isn't. Some people hope this will soon change. The Society of Automotive Engineers (SAE) created a committee that's working to set an appropriate standard for measuring towing capacity to y put this issue to rest once and for all [source: Henderson].

In your truck search, keep in­ mind that you have scores of options. Even among half tons, payload and towing capacities can vary. Hauling power depends on variables like the engine, the transmission, the quality of the brakes and rear axle [source: Cook]. Although they're the most popular-selling trucks, half-tons are known as light duty vehicles and are meant for lugging furniture and other relatively small loads [source: Wiesenfelder]. If you have more hefty loads, try heavy duty vehicles, including three-quarter-ton and one-ton trucks, which generally have bigger frames, firmer suspensions and more powerful engines.

But there's plenty more to consider when it comes to truck buying. The links on the next page will help you on your search.

Take your loaded truck and trailer to a scale and use these numbers to find out if you are towing more than your truck can handle. To determine the safe towing capacity for your loaded truck, take the GCWR and subtract the curb weight and the weight of everything in your truck, including passengers and cargo. To determine safe payload capacity, take the GVWR and subtract the curb weight of the truck. Because curb weight only considers base options of a truck model, stay below these capacity estimates to be on the safe side

What happens to a truck if it tows more than its capacity?
How Oversize Loads Work
How Cargo Carrying Capacity (CCC) Works