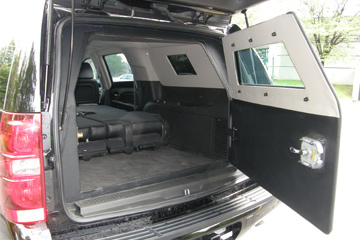 The Chevrolet Suburban is the most popular personal protection model.
Photo courtesy of Alpine Armoring

The first thing most people think of when they see the phrase "armored car" is the bulky, square truck that picks up and drops off cash at the local ATM. What people don't often think of are the personal transport or military-grace vehicles keeping people safe around the globe. Armored vehicles can be divided up into four basic types:

SUVs/Sedans: These are sometimes called "personal protection vehicles." They don't look any different than straight-from-the-factory models, but they've had armor applied throughout. The Chevrolet Suburban is the most popular personal protection model.

Cash in Transit: This is the Brinks or Wells Fargo truck, which is not always all that well armored. Usually, these trucks only have to protect against handguns, which requires a lower level of armoring.

Police/SWAT/Tactical: These vehicles look similar to the cash in transit trucks, but they're seriously armored for police and emergency use, where a variety of weapons may come into play.

A few manufacturers, like Mercedes-Benz in Europe, are able to armor vehicles at the factory. Most armored vehicles, though, get their extra protection from specialists. Companies like The Armored Group and Alpine Armoring buy plain-Jane vehicles and transform them into G.I. Jane-worthy armored vehicles.

Customers for these vehicles range from governments, who buy them for heads of state, to CEOs and heads of non-governmental organizations operating in violent and dangerous parts of the world. And, of course, banks, police and militaries use armored vehicles.

Up next, let's take a look at the history of armored cars. You may be surprised to hear just how far back in history the idea originated. 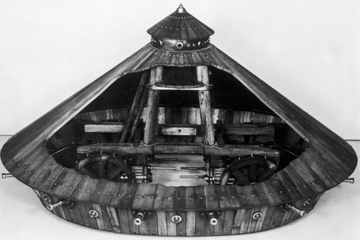 A cutaway view of a 20th century model of a tank designed by Leonardo da Vinci.
Hulton Archive/Getty Images

The idea of an armored vehicle predates the invention of the internal combustion engine, it seems. In fact, none other than the multi-talented Leonardo da Vinci made sketches of an armored war vehicle in 1485. It consisted of a circular platform on four wheels with light cannons arranged facing out. These were covered with a cone-shaped shell of panels with a turret at the top for a lookout. Underneath were the cranks and gears to make the wheels turn and propel this proto-tank forward.

And that was the problem -- the cranks and gears wouldn't work as they were drawn. The mechanism, as da Vinci sketched it out, would end up turning the wheels in opposite directions.

All the wheels on the next armored car, however, and more than 400 years later, turned properly. Rolls-Royce Ghosts were armored by the company for use in World War I, with the first heavy-duty Ghosts seeing service in August 1914. They were used by the Royal Naval Air Service in Great Britain, and came equipped with gun turrets.

Not long after, no less a romantic figure than Colonel T.E. Lawrence -- Lawrence of Arabia to you and me -- put a fleet of nine armored Rolls-Royces to use in his campaigns in the Middle East. He went so far as to call them "more valuable than rubies" for fighting in harsh desert climates [source: HistoryNet].

Armored cars have come a long way in the past century. Next, let's look at what it takes to create a modern armored personal protection vehicle.

How to Armor a Vehicle 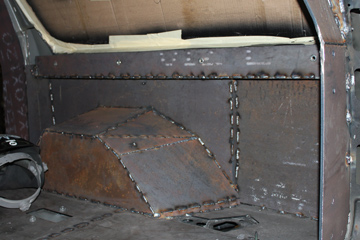 The armor, which in most cases is high-hardness ballistic steel, is applied like a jigsaw puzzle all over the car, including underneath.
Photo courtesy of Alpine Armoring

First, you have to have a suitable vehicle to armor. Most armored cars are built to customer specifications, so a company like Alpine Armoring will buy from a dealership or a fleet service. The vehicle will be brought to the shop and stripped of absolutely everything -- seats, carpet, headliner, door panels -- everything.

Then the armoring begins. The armor, which in most cases is high-hardness ballistic steel, is applied like a jigsaw puzzle all over the car, including underneath. There's a small overlap with each piece, as gaps are not good in any armored car. "Think of it as a cocoon," says Ron Leffler, project manager at Alpine Armoring. "If you were to shoot the car from any angle, it would not get through." That includes the firewall, the tailgate and even the battery being armored. The factory glass is replaced with custom glass anywhere from 1 to 3 inches (2.5 to 7.6 centimeters) thick.

There are different levels of armoring, depending on the type of ballistic the customer wants to stop. Lighter armor doesn't add as much weight, but it only stops handguns. The heaviest armor really weighs a vehicle down, but it can also stop a sniper rifle.

When all the materials are overlapped, then the interior goes back in and the panels go back on. The idea is to keep the vehicle as original-looking and inconspicuous as possible, says Leffler. "Our first goal is to be the only armored vehicle in a row of cars, but you're unable to tell. Our second goal is that if an attack occurred, you'd survive the attack. And our third goal is to be able to get out of the area and back to safety."

The process is quick to describe, and painstaking to complete. Robert Pazderka, owner of The Armored Group LLC, says it can take a few weeks to convert a vehicle with a lower level of armoring. The more heavily armored vehicles can take several months to complete.

Keep in mind that the armor adds several thousand of pounds, so brakes, shocks, and sometimes even the engine have to be modified to haul all that weight around. Also, things like rear side curtain airbags have to be removed to install the armor. That means the car's computer has to be reprogrammed to forget that it ever had rear side curtain airbags; otherwise, that annoying little light will keep popping up on the dashboard.

Besides the ubiquitous Brinks trucks parked outside the bank, there are a few other famous armored cars out there. Keep reading to find out what goes into protecting world leaders (and fictional characters, too). 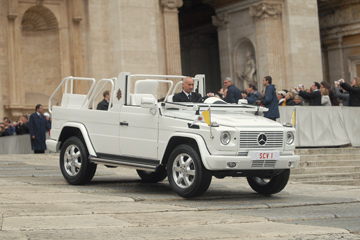 In 1930, Mercedes-Benz presented Pope Pius XI with its first papal vehicle, a Nurburg 460. In the eight decades since, we've come to know these armored vehicles with the white interior as "Popemobiles" (the Vatican doesn't like that name, but everyone else seems to).

These days, Pope Benedict XVI has a small fleet of armored Mercedes-Benzes at his disposal. The most recent was a Mercedes-Benz G500 modified SUV, presented to the Pope in December 2007. The Vatican requested that a Popemobile be created for nice weather, so Mercedes fit the G500 with folding windshield and handrails, as the Pope would be standing for better visibility. The SUV is finished in Vatican Mystic White, as all the Popemobiles are, with red carpet steps at the rear for Pope Benedict's entry and exit.

There's not much that can be said about President Obama's official limousine. That's because the Secret Service lives up to its name when it comes to the president's security. We do, however, know that it's a truck-based Cadillac presented to the president in 2009 and christened at his inaugural parade. We also know that the rear seat is a mobile office, and that security was extremely tight even during the building and testing process.

Armored cars are used even by fictional characters, like Dr. Cullen in the Twilight series of vampire books, who drives a Mercedes-Benz S-Class Guard. The Guard cars aren't available from Mercedes in the United States, but they come with a driver training program, which we can assume Dr. Cullen took advantage of. The car is so heavy that the driving dynamics change. Mercedes promises to teach drivers -- often professional chauffeurs -- "how to make optimum use of their cars in every situation." Even, presumably, highly dangerous ones.

Let's look into the future of armored cars on the next page.

The Future of Armored Cars 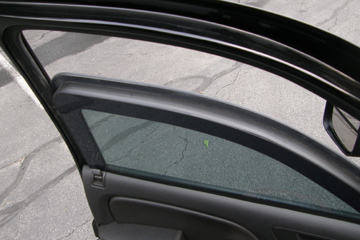 The factory glass is replaced with custom glass anywhere from 1 to 3 inches (2.5 to 7.6 centimeters) thick.
Photo courtesy of Alpine Armoring

After a century of armoring vehicles for a variety of uses, what could possibly come next? Leffler and Pazderka agree: lighter materials. Using a space-age bullet-stopping composite fiber instead of thick steel would mean fewer modifications and an even more undetectable silhouette. The drawback is the cost -- composite materials can cost as much as three times as much as steel.

A composite that's already in common use is Kevlar, which can be found in bulletproof police vests. Vehicle armorers are already putting it to use as light protection. A newer polyethylene product, Dyneema, creates a fabric of thousands of short, sandwiched fibers from one end of the car to the other. "If you take your finger or a knife and scratch the fiber, little strings come off," says Leffler. But with a high price tag to match its high protection level, the military is the only customer right now that can afford to use Dyneema.

For more information about armored cars and other related topics, follow the links on the next page.