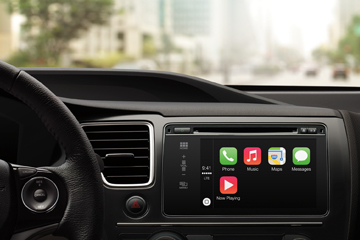 The trendy types tell us that kids these days don't want to drive; they want cars to drive for them. They don't want to buy a car of their own; they'd rather car share. In fact, they don't want cars at all; they want phones. Well, automakers and cell phone makers are taking note -- probably using Apple's Siri or a stylus and their Evernote app for Android. The 2014 Consumer Electronics Show, which is normally a nerd network of computer geekery and unflattering khaki pants, had a record number of automotive exhibitors on the floor. Even if they didn't have a full-blown booth, car manufacturers had representatives making the rounds. Plus, there were more than a hundred auto tech companies, the kind that make stereos and in-car connectivity systems, at the show.

Apple is ready to take a fat slice of that pie. It introduced the awkwardly but accurately named "iOS in the Car" system at its own Worldwide Developers Conference (WWDC, to you fan boys and girls) in June 2013. By the time the International Motor Show in Geneva rolled around the next winter, Apple CarPlay had a sleek new name and deals with a handful of auto manufacturers to get it into their latest models by the end of 2014. Like so many in-car communications systems, the whole idea behind CarPlay is to allow you to do all the things in your car, yet not be distracted by doing all the things, which are not driving things. No word on if Siri can take dictation while your mouth is filled with the burrito that you're eating while you drive back to work on your lunch hour, but maybe we'll find out how well that works once the equipment is in the cars and those cars are driving on the streets where your kids play. It'll be fine. 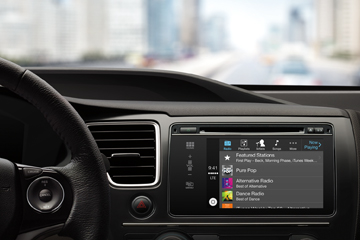 The idea of CarPlay, and almost every in-car entertainment and communications system, is to minimize distractions.
(Courtesy of Apple Inc.)

The how-it-works part of CarPlay is pretty simple, which is just how Apple likes it. Take your iPhone 5, 5S, or 5C and plug that sucker into the car's Apple-ready interface with the Lightning cable. Voila! Your car is your phone, just like you always wanted. The 21st century has arrived. The car's computer doesn't do the heavy lifting of running iOS; it has other jobs to do, after all, like reading information from the sensors to keep your ABS working or making sure your airbags inflate when you hit the car in front of you while you fight with Spotify over which Maroon 5 playlist you want to hear. Your iPhone runs the entire operating system, which is what it was built to do.

That means the apps have to be installed on your iPhone in order to see them on the car's interface in the console. But unlike that rigged-up system you've got going now with your stereo, your phone and about seven different cables and cords, CarPlay completely integrates the car and the iPhone. It works natively with the car's controls, like volume, so you don't have to fumble for the phone to make changes. It also works with the touch screen, so the glass in the console works just like the glass on your phone.

Not all apps can run on CarPlay; as usual, Apple will have final say on what's cool and what isn't. (Cool: black turtlenecks. Not cool: Google.) Really, the app selection comes down to safety. The idea of CarPlay, and almost every in-car entertainment and communications system, is to minimize distractions. At least, that's what all the tech makers say. In any case, it's very unlikely that Apple will make it okay to play Candy Crush or Flappy Bird while you're driving. Music, navigation, and anything that lends itself to hands- and eyes-free use will be cool, because your hands and eyes should be driving. Not dealing with that Maroon 5 playlist business. Seriously.

Leave it to Siri 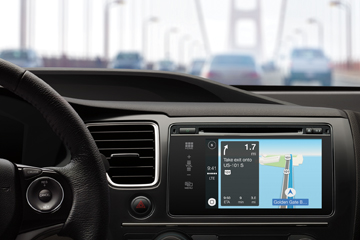 Apple Maps has improved quite a bit since its early days.
(Courtesy of Apple Inc.)

If you've fallen in love with Siri and can't stand to be without her voice for even a second, CarPlay will make your dreams come true. (Also, you should see the critically acclaimed film and cautionary tale known as "Her."Maybe take some notes.)Siri will talk to you right through your car, surrounding you with her dulcet, stilted tones. She'll check your calendar and e-mails and tell you about upcoming meetings and appointments as you drive. She'll read your text messages to you and allow you to dictate your response, which she will then send on its merry way. And she'll help you make hands-free calls. Witty banter is probably entirely up to you, though. This is Siri, not Pepper Potts from "Iron Man."

At its debut in Geneva, CarPlay only had a few non-Apple pre-approved apps available. Siri is a tough gatekeeper. Most of what you can get out of the third-party gate is music apps, which makes sense. Cars and music are a time-honored tradition, even in the era of smartphones. Stitcher, Beats Radio, Spotify and iHeartRadio are all there. Rdio is not, if that's a deal breaker for you.

But you know what else is not there? You probably don't need to be told, but here it is anyway: Google Maps. There's no way Siri is allowing that Street View-ing app-hole onto her iOS. You'll use Apple Maps with CarPlay, and you'll like it. Actually, you probably will like it. Apple Maps has improved quite a bit since its early days. Plus, there's the bonus of having the map on your car's screen and the spoken turn-by-turn directions coming through your speakers, rather than having to strain to hear Siri when she's perched in your cup holder. 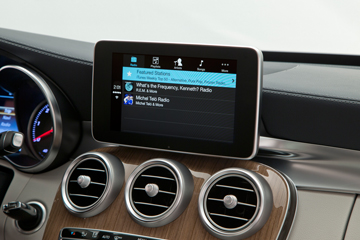 As of early 2014, Apple has confirmed deals with about a dozen auto manufacturers, including Ferrari, Honda, Hyundai, Jaguar, Mercedes-Benz and Volvo.
(© Mercedes-Benz USA)

When Apple debuted CarPlay at the 2014 Geneva Motor Show, the company confirmed that it had deals with about a dozen manufacturers, including Ferrari, Honda, Hyundai, Jaguar, Mercedes-Benz and Volvo. That's quite a price range, so even if that Ferrari thing threw you off, you'll probably be able to find a car equipped with CarPlay that you can actually afford. These are the early adopters, but nearly every manufacturer will be able to play nice with CarPlay in 2015. Besides, who doesn't need more shiny gadgetry in the cockpit of their 651-horsepower Ferrari FF? What else are you going to do, just drive it? That's ridiculous.

If you Android fans are feeling the freezer burn of Siri's cold shoulder, don't worry. Google announced its Open Automotive Alliance (OAA) at the 2014 CES. It'll do pretty much the same thing as CarPlay, and it should also be in cars by the end of 2014. The early list of partners for OAA includes GM, Audi, and most interestingly, Hyundai and Honda. That's right -- those last two nutty manufacturers are working with both Google and Apple for in-car connectivity, like the Switzerlands of automotive apps. So if you kit-out your car at the dealership, you'll likely be able to choose the operating environment you already live in for the car you want to buy. And as long as the operating system lives on your phone rather than in the car's hard drive, it makes perfect sense.

There are many things I love about living -- and driving -- in this future. I love traction control, and collision mitigation systems, and automatic cruise control, and playing Pandora stations or Spotify playlists through my stereo. But all that other business -- sending text messages via voice command, having your appointments read to you while you drive -- that stuff should be left for the driverless cars of the next future. We still have to pay attention to the street ahead of us and the crazy kids on bikes on the sides of us, and that's hard to do when someone is reminding you that you have a dentist appointment at noon. Sure, your hands are on the wheel and your eyes are facing forward, but most of us turn our attention inward when we're listening to Siri or her ilk. It's not about where your hands and eyes go; it's about where your brain goes. As soon as you've got a driverless car, your brain can go wherever you like.

Did Pintos really explode in the 1970s?
Most People Think Texting While Driving Is Fine, Study Says
Could your car get a computer virus?