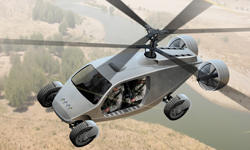 A lot us of deep down really do want a flying car, but one of the main drawbacks to having your own will be the cost. Consider the following facts:

Flying cars might not be millions of dollars like the government project, but they definitely won't come cheap. The closest thing we have to flying cars right now is more like a plane that folds its wings up and drives like a car. The car-plane, developed by Terrafugia, has a price tag closer to $300,000 compared to the average cost of a new car which is about $30,000 [source: Welsh]. So you can imagine that if car companies start selling flying cars in the future, they'll be priced higher than most of us can afford.

Not only that, but if you're tired of filling up your car to go to work, you're not going to be much happier filling up a flying car either. Fuel costs for planes are more than the cost for cars [source: AirNav.com]. Even if we are able to fill up flying cars with regular unleaded gasoline, if you start running low on fuel in the air it's not like you can just pull into a station and fill up.

The cost of your car insurance is going to skyrocket, as well, because you're not just insuring a car anymore; you're insuring a car that can fly. Imagine paying for premium coverage because your car cannot only get into accidents, but also crash to the ground.

Now let's find out why you wouldn't want to break down in your flying car.