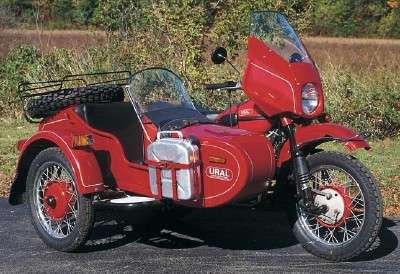 Priced at $6,000, the Russian-built, BMW-inspired 1997 Ural with sidecar was a good value. See more motorcycle pictures.

After World War II, Russia seized BMW's plant in Germany and moved the tooling and equipment back to the Soviet Union.

A short time later, what were essentially reproductions based on parts from different BMW motorcycle models hit the market carrying Ural badges.

Though the design has seen updates over the years, the latest URL motorcycles still closely resemble the originals -- and, by association, more-modern BMWs.

The 1997 Ural motorcycle's 650-cc horizontally opposed twin remained a simple overhead-valve affair, and sidecar versions retained the option of having a powered wheel that comes in handy on rough terrain.

Suspension was by traditional swingarm with coil-over shocks in back, but in front was a modified Earles fork reminiscent of those used on BMWs from the mid 1950s to the late 1960s.

Wheels on the 1997 Ural motorcycle retained drum brakes and were interchangeable; the spare could be fitted to any of the three corners.

Though it looked ungainly and crude by 1990s standards, a 1997 Ural motorcycle with sidecar could be purchased for about $6,000 -- quite a transportation bargain.

And the fact that the 60-year-old design was still in production was also a compliment to its original German maker.

Continue to the next page to see more 1997 Ural motorcycle pictures. 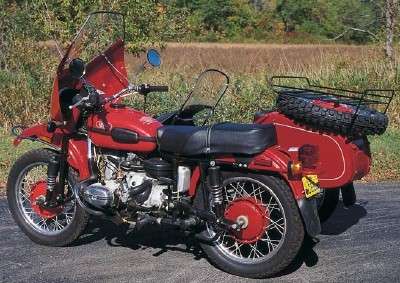 The sleek fairing might look at home on a 1980s sportbike, but other components of the Ural appear more out of date and strictly functional.

The Russian-built 1997 Ural motorcycle was largely based on BMW motorcycle components appropriated by the Russians as spoils of war.

The 650-cc, overhead-valve, horizontally opposed twin puts out about 35 horsepower, and closely resembles a BMW engine design -- of the 1940s.
Earles-type forks are also reminiscent of BMWs of long ago, as is the powered sidecar wheel.
No, the speedometer isn't wildly optimistic; it's calibrated in kilometers per hour, not miles per hour.