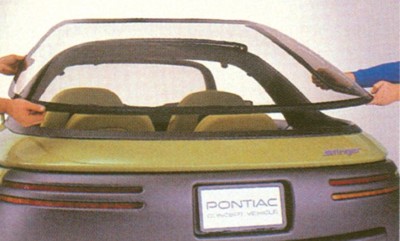 All in all, five panels were removable on the 1989 Pontiac Stinger concept car, including the rear glass.
©2007 Publications International, Ltd.

In fully assembled form, the Pontiac Stinger concept car offered a comparatively traditional design. Nothing shocking, at least not until the glass panels began to come off in an automotive strip-tease every bit as titillating as the human version. By the time all five left the car, you were left with a (literally) open-air sport vehicle: topless, windowless, fully exposed to the elements.

Even the big panel in the center of each door was ready for a quick pop-out at any moment, to let fresh air flow across everyone's legs. But wait, the thoughtful folks at Pontiac declared, why let that space go to waste as nothing more than an airflow entry? Let's plug the gap with a beverage cooler, so there will always be plenty of refreshing cold drinks on hand when the revelers hit the beach.

The cooler was just the beginning. Indeed, not many vehicles of any kind have come with an accessory list to match the Pontiac Stinger concept car's.

Tucked in nooks and niches throughout the interior you found a pull-out radio (with handy carrying case) for entertainment in the sand, a portable hand vacuum to clean off that sand after it's traveled from swimsuit to seat, a camp stove, and a flashlight. Also incorporated into the Stinger's unique shape were a first aid kit, a fire extinguisher, a toolbox, and even a hose.

Accessories for the Pontiac Stinger included a camp stove, a vacuum, and, remarkably, a picnic table.
©2007 Publications International, Ltd.

No need to search for a picnic table on crowded weekends, either; Stinger brought its own, ready to fold out for under-the-sun dining. A built-in utility seat within the front passenger seat slipped out for use as a camp chair.

Indeed, the 1989 Pontiac Stinger concept car appeared to some critics as little more than a collection of accessories. But there was more to the car, as you'll see on the next page.