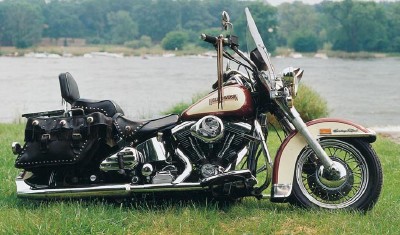 When introduced during the 1986 model year, the Harley-Davidson FLSTC motorcycle was an instant hit. While it wasn't the first of Harley's retro-styled designs, it certainly set new standards for "Back to the Future" models.

Chief among its new retro features was Harley's Softail frame. Introduced in 1984, it looked like hardtail frames of old yet incorporated modern rear-suspension technology.

In 1984, Harley-Davidson introduced the sixth generation of its Big Twin motor, the new arrival being called the Evolution V2. Replacing the "Shovelhead," which had been in use since 1966, the "Evo" (as it came to be called) remained an 80-cubic-inch overhead-valve design, but incorporated many refinements that made it smoother, more reliable, and more powerful.

Only selected models got the Evo in 1984 -- some continued with the Shovelhead -- but all had it the following year.

In deference to its retro theme, the FLSTC (which, deciphered, meant FL frame and forks, SofTail frame, Classic styling), was dubbed the Heritage Softail. The model was been so popular that a similar Heritage became a staple of the Harley lineup into the 21st Century.

Continue on to the next page to see more 1988 Harley-Davidson FLSTC motorcycle pictures. 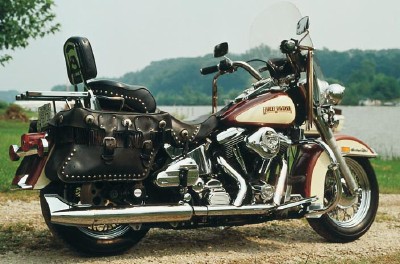 The 1988 FLSTC set new standards for Harley's "Back to the Future" models.

The 1988 Harley-Davidson FLSTC motorcycle was an instant hit and was dubbed the Heritage Softail. The official name meant "FL" frame and forks, "ST" softtail rear-suspension technology, and "C" classic styling.

Simple, bold, machine-like--that was the rider's view.
Dual spotlights had been common add-ons since the 1950s, and are no less useful today.
The front-fender badge mimicked the lettering style used since the Hydra-Glide days of the late 1940s.