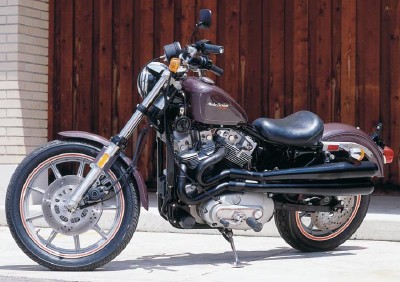 Harley's XR-750 racing bike enjoyed such success on the nation's flat tracks that a street version was introduced in 1983 to capitalize on the notoriety.

Though based on the stripped-down XLX Sportster, the XR-1000 was fitted with special cylinder heads similar to those found on the racing version.

These had intake ports entering the rear of both cylinders fed by dual carburetors on the right-hand side, and front-exiting exhaust ports emptying into high-mounted dual mufflers that exited on the left.

By contrast, all other Sportsters had a single carb (also on the right) that fed to centrally mounted intake ports, with exhaust exiting on the right from outboard ports.

The modifications resulted in an output of nearly 70 horsepower, a figure only dreamed of for other Sportsters, and gave the XR-1000 acceleration unequaled by any other street motorcycle Harley had ever built.

Unfortunately, the race-bred hardware that made the XR-1000 quite fast also made it quite expensive. At nearly $2,000 more than the XLX, not enough riders appreciated the difference, and the XR would fade into the sunset after the 1984 model run.

Continue on to the next page to see more 1984 Harley-Davidson XR-1000 Sportster motorcycle pictures. 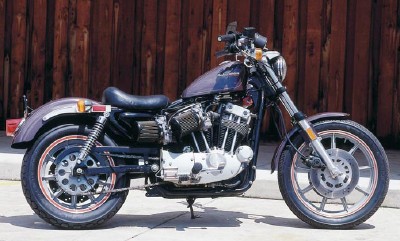 The XR-1000 Sportster's acceleration was unequaled by any other street motorcycle Harley had ever built.

The 1984 Harley-Davidson XR-1000 Sportster motorcycle was based on the stripped down XLX Sportster, but it was fitted with special cylinder heads similar to those on the racing version for more horsepower.