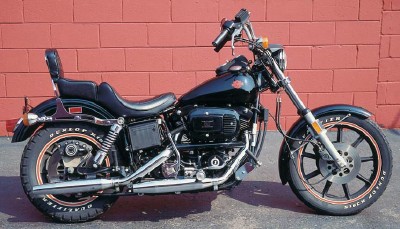 The 1982 Harley-Davidson FXB Sturgis was named for the famous biker gathering and is now a collector's piece. See more motorcycle pictures.

The 1982 Harley-Davidson FXB Sturgis motorcycle was fitted with toothed belts instead of the typical chains, providing a clean, quiet ride.

For more than half a century, the annual trek to the Black Hills of South Dakota has become a ritual for thousands of motorcycle enthusiasts.

One week each summer, the town of Sturgis teems with bikers from around the country, and in 1982, Harley-Davidson decided to commemorate the event with the release of the FXB Sturgis.

As denoted by the "FX" prefix in the nomenclature, the FXB is based on the Low Rider chassis and engine. The big difference is the "B" suffix, which in this instance stands for belts; both the primary and final drives are fitted with toothed belts in lieu of the typical chains.

Although more difficult to repair, the dual belt system provides clean, quiet, and mostly trouble-free operation. Starting of the FXB's 80-cubic-inch "Shovelhead" V-twin can be accomplished by either pushing a button or kicking a lever.

An electronic ignition alleviated some earlier problems, making the big twin easier to fire up.

The Sturgis is clothed in black with just enough chrome and color to make things interesting. A two-inch extension of the front forks gives it a "chopper" look. The fuel tank is topped with a speedometer, tachometer, and matching filler caps.

Like virtually all of Harley's early customs, the Sturgis is now a collector's piece. Unlike some of the others, however, it was a hit right from the start.

Continue to the next page to see more 1982 Harley-Davidson FXB Sturgis motorcycle pictures. 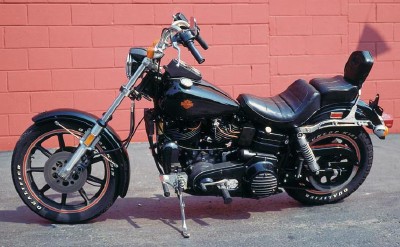 A two-inch extension of the front forks gives the FXB Sturgis a "chopper" look.

The 1982 Harley-Davidson FXB Sturgis motorcycle was based on the Low Rider chassis and engine, and it also featured primary and final drives fitted with toothed belts in lieu of the typical chains.

Black trim replaced brightwork on the headlight cover.
The dual belt system provided a clean, quiet, and mostly trouble-free operation.
Dark trim replaced a shiny finish on the "ham can" air cleaner, too.
The fuel tank was topped with a speedometer, tachometer, and matching filler caps.