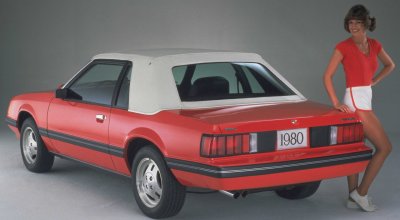 "New Breed" Mustang styling, introduced in 1979 and little changed in this 1980 model, had a uniquely "Mustang" kind of sporty elegance. See more pictures of sports cars.

Marketers had put a Roman numeral on the 1974-1978 Ford Mustang II to emphasize just how different it was from previous Mustangs. For the same reason, they removed the suffix when they launched the new generation with the 1979 Ford Mustang. To drive home the point that this was a new Mustang with renewed spirit, they also came up with a freshened running horse emblem that looked more like its muscular old self.

The car attached to it looked nothing like any Mustang before. Clean, taut, and crisp, it combined the best of American and European design thinking, yet had a uniquely "Mustang" kind of sporty elegance. Admittedly, some old shortcomings remained: problematic handling, a less-than-ideal driving position, limited passenger room, and workmanship that didn't compare well with that of European and Japanese cars like the BMW 3-Series and Toyota Celica. But no car can be faultless, especially one so affordable. By almost any standard, the '79 Mustang marked a second revolution for Ford's pony car.This basic design would be good enough to continue without fundamental change for no less than 14 years, an eternity in the auto business. Even more remarkable, a subsequent retooling enabled it to ride on another 11 years -- and outsell its two remaining rivals along the way. By 2003, Ford again had America's only pony car...but we're getting ahead of ourselves.Dearborn Changes CourseThe '79 Mustang was the result of a bold decision taken a good six years earlier. Even before the Middle East oil embargo, Detroit began to realize that many of its cars had simply grown too big. With Washington's endless stream of safety and emissions rules, the Big Three began to wonder if fuel-economy standards wouldn't be next. Indeed, April 1973 ushered in a new mandate for vehicle window stickers showing mileage figures for city and highway driving as calculated by the recently established Environmental Protection Agency (EPA). The numbers weren't very accurate at first, but the implication was clear. Then the gas crunch hit. "Almost overnight," records historian Gary Witzenburg, "fuel-efficient cars were in and gas-hogs were out, maybe forever as far as anyone knew, and Detroit wasted little time in formulating future plans for a newly fuel-conscious America."

This early "concept" sketch by Fritz Mayhew pointed the way toward 1979 Mustang styling. Note the low, slim nose tapered sharply down from the windshield.

As it happened, General Motors was already planning to "downsize" its cars, starting with 1977 full-size models. Chrysler, with far less capital, would bank on updating its popular compacts and offering smaller "captive imports" from overseas partners. Ford had different ideas. In public at least, chairman Henry Ford II staunchly defended tradition. The gas crunch was an aberration, he said. Once it passed, most Americans would again want big cars with big engines and "road-hugging weight," just as they always had. He was right -- to a point. The oil embargo was short-lived, and much of the public did swing back to big size and power. However, keep reading to learn how the oil barons would deliver another shock even as the '79 Mustang was reaching showrooms.