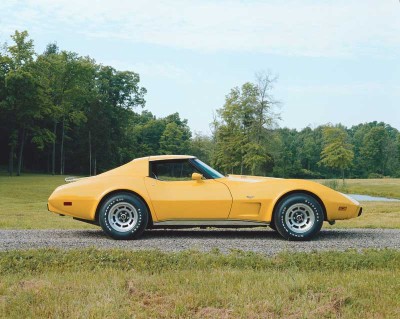 The 1977 Corvette was one of the few American performance cars still left, one reason yet another Corvette sales record was set that year. See more pictures of classic cars.

The 1977 Corvette arrived with only modest modifications. Mechanicals were carried over unchanged, as the year's tweaks generally aimed for more refined cruising. Inside, the console was redesigned to accept a larger array of Delco audio decks (including an AM/FM/cassette stereo as a first-time option), its instruments were restyled for greater legibility, and climate controls were simplified.

A leather-rim sport steering wheel was adopted (tilt/telescope adjustment remained optional), along with a new "Smart Switch" steering-column stalk that combined the headlight dimmer and wiper/washer functions with the turn signals. The steering column itself was shortened to permit a more "arms-out" driving posture; the change also eased entry/exit somewhat.

A related modification lengthened the manual transmission lever for easier use of the handbrake. The alarm switch moved again and was now incorporated with the left door-lock button. The rearview mirror also shifted location slightly, and sunvisors were revamped.

Leather upholstery was now standard, and cloth seats with leather bolsters became an extra-cost item. Power steering and brakes were made newly standard, as well.

Outside, the optional rear-deck luggage carrier was reworked so that the T-tops could be carried there instead of in the lidless trunk, where they were less convenient to stow. Glass roof panels were shown as a new option at the start of the model year, but GM canceled them in a reputed dispute with the supplier over sales rights. The vendor eventually marketed them itself, and Chevy promptly went to another source for 1978. One final exterior change for the 1977 Corvette would be noted instantly by car spotters: The Stingray nameplate came off the front fenders, replaced by the traditional crossed-flags insignia. The car was again simply called Corvette. 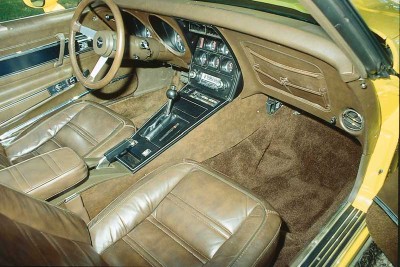 The sales tally was 49,213 for 1977, when Stingray badges came off and leather upholstery became standard.

Sales set another new record for the '77 model year at 49,213 -- which was (and still would be) amazing for a decade-old design. Ironically, while the Corvette was nearly pulled from Chevy's lineup during the heyday of the sports car in prosperous post-war America, it actually thrived throughout poor economic times, during a period in which the performance-car ranks were dwindling, and despite carrying on with more modest performance than at the beginning of its run. The increased sales spoke volumes about GM's knack for successfully updating a design to meet changing market conditions without detracting significantly from the car's fundamental appeal.

Though getting on in years, the Shark still had some miles left in it, however. The car would enter its 25th year in 1978, and Chevrolet had some special tricks up its corporate sleeve to help its many fans celebrate the car's silver anniversary with a bang.

The Shark lost its convertible after 1975, the Stingray name for '77. But Corvette continued to evolve from fire-breathing muscle car to suave grand tourismo, abetted by the recent gas crisis, changing buyer tastes, and more federal mandates. Yet for all the change in its character, the Shark was one of the few American performance cars still left, one reason the '77 set yet another Corvette sales record. Here are the specifications for the 1977 Corvette: