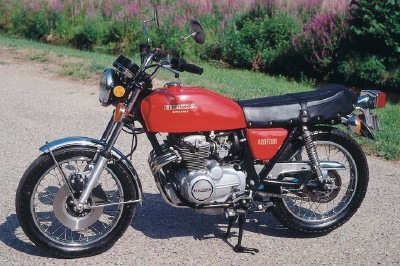 The Honda CB400 was an updated version of the 350, but with a more racer-like look and feel. See more motorcycle pictures.

The 1975 Honda CB400 motorcycle was, for the most part, simply an upgraded version of the 350 model from the previous year. But it carried on Honda's assault on the sporting bike market as yet motorcycle that was reliable, easy to ride, and deceptively quick.

After introducing the world to "popularly priced" four-cylinder motorcycles with the CB750 in 1969, Honda followed with a string of lighter fours featuring engines as small as 350 ccs. One of the most sporting of these was the Honda CB400 motorcycle, introduced in 1975.

The most striking change between the 1975 Honda CB400 motorcycle and the 350 was the swoopy four-into-one exhaust system that snaked around the frame, converging into a single muffler on the right side of the bike.

Also noticeable were the angular fuel tank and flat cafe-style handlebars, all of which gave the bike a more racer-like look and feel than the rather pedestrian 350.

Although aimed at the sporting segment of the market, the 1975 Honda CB400 motorcycle came up a little short in the performance department compared to the competition, most notably the quick but noisy two-stroke triples from Kawasaki.

But whatever the CB400's engine lacked in power it made up for in refinement, the small-displacement four-stroke being smooth and less audibly irritating than a two-stroke.

To help keep the engine in its power band, Honda employed a six-speed transmission -- something of a rarity at the time.

The Honda CB400 motorcycle could out-handle most sporting machines of the era, though it couldn't keep up on the straights.

Go to the next page to see more pictures of the 1975 Honda CB400 motorcycle. 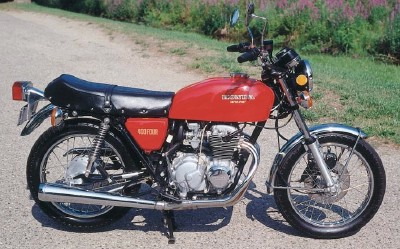 The affordable CB400 was among the few motorcycles of any price that had a six-speed transmission in 1975.

The 1975 Honda CB400 employed a four-into-one exhaust system that converged into a single muffler on the right side.

Small but willing, the CB400's four redlined at an ambitious 10,000 rpm.
The CB400's 408-cc four-stroke four-cylinder was quieter than rival Kawasaki's two-stroke three-cylinder engine.
A front-disc brake provided great stopping power.
The angular fuel tank looked to be from a race bike and added to the 400's sportiness.