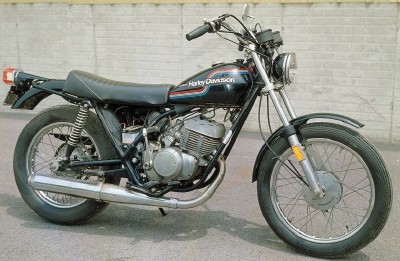 The 1975 Harley-Davidson SS-250 was a mid-size motorcycles based on a Yamaha design and featured a two-stroke single engine.

Harley-Davidson had formed a partnership with Aermacchi of Italy in the early1960s to sell mid-size four-stroke singles under the H-D badge. These were soon joined by a host of two-stroke models as small as 65 cc, and even some minibikes.

But while the larger singles were fairly successful, the times prompted something a bit more modern.

One of a quartet of new mid-size two-stroke singles based on a Yamaha design and introduced by Harley-Davidson in the mid-1970s, the SS-250 appeared in 1975 and was the largest street version offered.

On/off-road models carried the SX prefix, and both bikes were eventually available in 175- and 250-cc sizes.

However, the Environmental Protection Agency was beginning to frown on all two-stroke bikes as a major source of pollution.

As a result, the switch to two-strokes was -- in retrospect -- perhaps not the best choice, and Harley-Davidson quit offering singles of any type after 1978.

Continue to the next page to see more 1975 Harley-Davidson SS-250 motorcycle pictures. 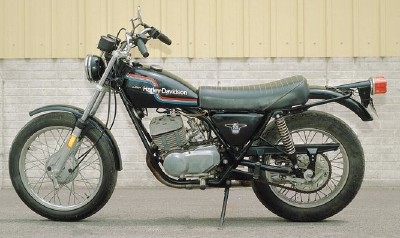 Harley advertised the 1975 Harley-Davidson SS-250 as ideal "For the discriminating road and highway rider."

The Yamaha-based engine provided decent performance,
Sporting-goods maker AMF purchased
Tach
A sign of the times: The 1975 Harley-Davidson
On/off-road Harleys carried the SX prefix, and were