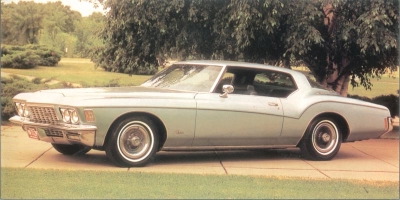 The 1972 boattail Riviera sported fully open rear wheelwells, which were emphasized by the sweep of the bodyside molding above them.
©2007 Publications International, Ltd.

The 1971 Buick Riviera options were numerous and attractive. Air-conditioning, which Buick referred to as "Climate Control," was very popular, and of course there was the usual array of power equipment -- seats, windows, even door locks.

The AM/FM radio was a comparatively new idea, and the Buick version featured higher fidelity than most people had come to expect in an automobile. There was the inevitable vinyl top, of course, though it really didn't integrate very well with the Riviera's overall design.

And then there was Max Trac, a device designed to regulate wheelspin for greater traction. This computerized gizmo, complex enough to delight the heart of Rube Goldberg, functioned by interrupting the ignition any time the rear wheels got to going 10 percent faster than the front wheels.

It was abandoned after only two years, however, reportedly because its operation was incompatible with the new emissions systems.

Another intriguing option was the self-leveling rear suspension. When there was a heavy load in the trunk, or when the back seat carried its full complement of passengers, an engine-driven compressor would inflate a pair of pneumatic bellows mounted on top of the shock absorbers. This enabled the car to maintain a level stance regardless of its load distribution.

But to the performance buff, the most appealing option was the GS, or Gran Sport package. Consisting of a high-performance engine, specially calibrated Turbo Hydra-Matic transmission, 3.42:1 positive traction differential, heavy-duty suspension, and H78-15-bias-belted white sidewall tires, it was a bargain at $200.

Modifications to the GS engine included larger valves, and a high-lift camshaft with three degrees more duration on intake, resulting in a horsepower increase from 315 to 330.

Tom McCahill, evaluating the GS for Mechanix Illustrated, was enthusiastic. "This is a great road car," he wrote, adding that the lower compression ratio "has made the Buick 455 cu. in. engine much smoother and quieter than in the past . . . In desmogging Buick they haven't hurt its performance as much as the boys first feared. It just shows what ingenuity can do. From the sporty car standpoint the Riviera isn't Lamborghini, but then there's nothing better being made on these shores."