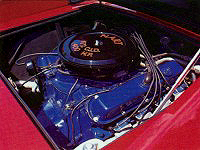 The NART Zagato drivetrain was a mix of GM parts.
©2007 Publications International, Ltd.

In 1968, an ambitious project was begun to bring to market a luxury/performance automobile that would compete favorably with Ferrari's legendary gran turismo cars. Involved were General Motors and Luigi Chinetti, famous Ferrari race car driver and the exclusive Ferrari U.S. distributor from 1947-1970. What ultimately evolved was the 1970 Cadillac NART Zagato, with each bearer of that name playing a vital role.

GM contributed the drivetrain: the Cadillac Eldorado's 472-cid V-8, as well as the Turbo Hydra-Matic and front-drive transaxle. The engine was rated at 375 bhp, though as installed in the NART 400 is claimed. The basic chassis was a modified Eldo unit, with the Caddy's drive unit mounted at the rear, but reversed for rear-wheel drive. Perhaps it's the shorter exhaust system that pumps out the extra 25 horses.

The NART connection came via Luigi Chinetti, who was responsible for engineering the car. He had been the spark plug in founding NART: North American Racing Team. Its logo combined a Ferrari prancing horse, stylized Stars and Stripes, and N.A.R.T. initials. NART president emeritus George Arents has said that "Every Ferrari or Osca entry at Le Mans or other European racing circuit was under our banner, as was the factory Formula One campaign from the middle of the 1964 season, which resulted in the world championship of John Surtees." NART badging can be found front and rear on the car, and on the dash.

The Zagato part of the name came from the noted coachbuilder that constructed the car, though Chinetti's son Luigi, Jr., has been credited with the body design. Zagato built the coupe (almost a 2+2) of aluminum. "Z" badges ride on the front fenders and the slightly modified 1967-1968 Eldorado hubcaps.

Components for the NART came from many sources. Cadillac contributed a dashboard that was adapted and narrowed, the steering column, four-wheel disc brakes, and more. (Some say Olds Toronado parts were originally used, and many surely would be interchangeable.) Pontiac donated the taillights from its 1968 GTO, and European parts were liberally used.

Though involved in the NART project initially, GM dropped out due to numerous delays and the economic difficulties of late 1969. GM's departure ended hopes of putting the car into production, even though it was shown in Turin and New York. Orders were even taken, but no cars were delivered to the public.

Even so, the project progressed to a second design stage for the coupe, with the goal of eliminating the "hump back" look. Car number three was a "bread basket" design wagon. Neither got past the drawing board.

Thus, the car seen on these pages is the one and only Cadillac NART Zagato: serial number 001. Melvin A. Olshansky, of Glencoe, Illinois, acquired it after it had been in the Chinetti family through 1987. It was fully restored in a 21/2-year effort by Mill Creek Motors and Upholstery Unlimited, of Clinton, Iowa, and Baileywicks of Fulton, Illinois.