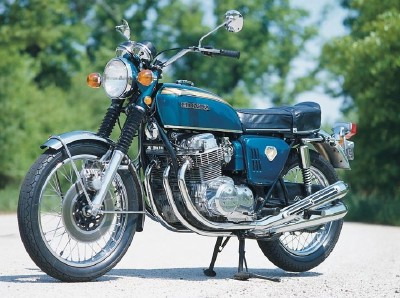 The 1969 Honda CB750 motorcycle offered a combination of hardware never before seen on a single machine. When Honda introduced the model in June of 1968, the manufacturer dropped the gauntlet that changed the world of motorcycling.

At the heart of the Honda CB750 motorcycle was an inline four-cylinder engine with single overhead cam, four carburetors, prominent four-into-four exhaust, and 67 horsepower at 8000 rpm.

For those keeping track, it put out a good 15-percent more power than BSA's new 750-cc Rocket 3 and at just under 500 pounds, weighed about the same.

It's not hard to guess which was quicker.

But it wasn't just the four-cylinder engine that caused such a stir; though most contemporary competitors were twins, several manufacturers had offered fours in the past.

No, it was the fact that four-cylinder power and smoothness was joined by a five-speed gearbox, electric starter, and a front disc brake --the disc brake first ever on a street machine -- all at a reasonable price.

The first Honda CB750 motorcycles were produced with sand-cast cases that had a rough finish; later models had smoother castings.

Those early sand-cast models, such as the Honda CB750 motorcycle pictured with this article, became the most valuable to collectors.

By 1970, Dick Mann had piloted a race-prepped Honda CB750 motorcycle into the winner's circle at Daytona, and the world of aftermarket hop-up equipment came alive.

The Honda CB750 motorcycle is also credited with casting the mold for what would later be called the "Universal Japanese Motorcycle," a breed of machines that would bring the bikes of England to their collective knees.

Go to the next page to see more pictures of the 1969 Honda CB750 motorcycle. 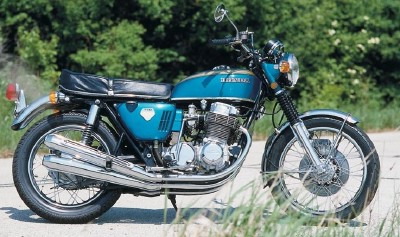 The 1969 Honda CB750 marked the beginning of the end for British motorcycles as performance leaders.

The 1969 Honda CB750 provided four-cylinder power and smoothness never before seen in the world of motorcycling.

Redline on the CB750's inline-four was 8500 rpm.
This CB 750 has an early engine, as identified by its sand-cast block casing. Collectors place a high value on these early models
A front-disc brake on a street machine was a first.