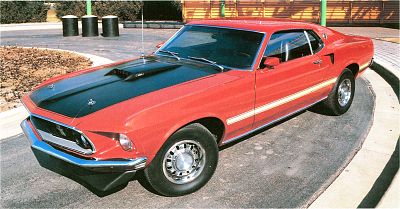 Not only did the Ford Mustang, Ford's popular "ponycar," get a major restyling in 1969, it added a selection of memorable models, including the 1969 Ford Mustang Grande and Mach 1. In all, five new models were added, plus a pair of "Bosses" later on. Throw in the selection of seven engines, and Mustang offered enough choices to satisfy every styling and performance appetite.

In just about every dimension, the revamped Mustang looked a little plumper, a mite exaggerated. Quad headlights continued to define its personality, with the outer pair positioned in a recessed niche-far removed from mates within the grille opening. Windows lost their vent glass. Even dashboards were more dramatic.

Not everyone agreed that each change followed the correct course. Back panels stuck closest to the original Mustang theme, albeit with flattened tri-section lenses. Otherwise, the car's proportions seemed a bit distorted, due largely to the expanded overhang out front.

Nevertheless, the year brought new monikers destined to enter the performance-car lexicon. The Mach 1, billed as the "wild newcomer," borrowed its name from a futuristic 1967 show car, the designation signifying the speed of sound (about 750 mph). With a handle like that, a car just had to travel with virtual supersonic haste -- which it did, at least when the available Cobra Jet 428-cid V-8 lay under the hood.

Motor Trend proved as much when their testers flashed an early Mach 1 with 335-bhp Cobra Jet to 60 in just 5.7 seconds, completing the quarter-mile in 14.3 seconds at a flat 100 mph. This, by the way, was accomplished with a three-speed automatic, the Mach 1 taking advantage of the 428's prodigious 440 pounds/feet of torque.

Not wholly impressed, the magazine complained that the "sum is far short of its parts" and performance didn't match the car's unabashedly aggressive demeanor. Gripes aside, they ranked this Mustang the "toughest one yet."

Available with or without Ram-Air, the Cobra Jet was one of five Mach 1 engines on the selection sheet. Choose Ram-Air, and a "shaker" hood scoop replaced the customary simulated opening. Base engine was Ford's "zesty" 351-cid V-8, with two- or four-barrel carburetion, and in between: a 390-cid engine. All but the 351 displayed quad-tipped dual exhausts. Big-blocks came with a four-speed or available SelectShift Cruise-O-Matic. Oddly, a tachometer cost extra.

On the next page, learn more about how the interior and exterior of the Mach 1 was fashioned and see what the Mustang Grande brought to the table.

The Grande version of the Mustang was aimed at the luxury end of the market.
©2007 Publications International, Ltd.

Though they were targeted at different markets, the 1969 Ford Mustang Grande and Mach 1 each had options that set them apart from the everyday Mustang.

Every Mach 1 carried GT-style equipment including E70 Wide-Oval belted whitewalls on styled chrome wheels, competition springs and shocks, and quick-fill gas cap. Racing mirrors faced both the driver and passenger. High-back buckets were trimmed in vinyl, and the driver handled a three-spoke wood-rimmed steering wheel. Teak woodtone decorated both the dash and the door panels. Low-gloss hood/cowl paint eased eyestrain when the going got tough, and pin-type latches held down the hood.

The Ford Mustang Grande was a Mustang of far different hue, aimed at another target. Focused more on luxuriant ride than hot motion, the Grande could have any Mustang engine, starting with the 200- or 250-cid six, on up through any of half a dozen V-8s (all the way to the Cobra Jet).

A Mach 1 sold for $3139, while $2866 bought a six-cylinder Grande -- this at a time when the base Mustang went for $2635. Ford ads promoted the fact that a modified Mach 1 held 295 USAC land speed records, achieved on the salt flats of Bonneville.

The 1969 Ford Mustang Grande could be ordered with anything from a 200-cid six to the 428 Cobra-Jet.
©2007 Publications International, Ltd.

Despite the popularity of the Mach 1 and Grande, total Mustang output (not including Boss versions) slumped to 299,870 for 1969, down from 317,404 the year before and close to twice that total in 1966. Yet without the additional selection, the year might have ended at an even lower point.

Though the Mach 1 and Grande nameplates lasted through the early 1970s, they had a hard time capturing as many customers as in their opening season. However, this was due more to the changing marketplace than to any deficiencies in the cars themselves, for these are prime examples of what Detroit could accomplish when its imagination was given free rein.

Read detailed specifications for the 1969 Ford Mustang Mach 1 and Grande on the next page.

Despite its promise, a slump in sales of the 1969 Ford Mustang Grande and Mach 1 indicated a shift in the car-buying market.

(A small number of Mach 1 Mustangs were special-ordered with a 427-cid engine.)