Probably the most sought-after Javelins today are the performance-oriented models, but a Javelin could be luxurious, too, as this 1974 coupe with vinyl roof indicates. See more classic car pictures.
©2007 Publications International, Ltd.

The 1968-1974 AMC Javelin was the creation of Richard A. Teague, chief designer for the company since 1960. Teague left his job at Chrysler and signed on as chief stylist for American Motors. There he remained until his retirement, which he took shortly after the French buy-in and restructuring of the company around Renault (and soon-to-be Chrysler) models.

AMC looked like a good choice for a talented designer in those days. It had been formed out of Hudson and Nash in 1954 by George Mason, whose untimely death later that year prompted George Romney's promotion into the president's chair.

Like Mason, Romney believed in smaller, more efficient "compact" cars, and so American Motors shifted most of its emphasis to the Rambler American -- just in the nick of time for the 1958 recession.

Thus, in a year when sales of most Detroit products plummeted, Rambler rolled to a record 200,000 units. A year after Teague had come aboard, AMC found itself third in volume behind Chevy and Ford, an amazing showing for an independent.

Teague couldn't have minded, after what he'd been through. California-born, a nut for cars and planes, he had joined General Motors in 1948 but was underwhelmed by the bureaucracy there. Switching to Packard, he became director of styling in 1953, only to play centerstage during the death throes of the marque in the mid-1950s.

Teague presided over AMC Styling through those prosperous years when the firm -- the leading purveyor of cars Romney called "alternatives to the Detroit dinosaur" -- could do no wrong.

Teague's eye for styling integrity turned the overstyled Rambler into a smoothly skinned design by 1963, while the American "ordnance vehicle" blossomed into a graceful compact by 1964, the same year AMC embarked on its ponycar project.

The 1968 production Javelins deviated from the styling studies mainly in the front end design, which featured a high-mounted grille but with a more smoothly integrated front bumper.
©2007 Publications International, Ltd.

While the AMC Javelin was very definitely a competitive response to the wildly successful Ford Mustang, other complex changes occurring at American Motors at that time also affected its creation.

When Romney resigned to enter politics in February 1962, his replacement as president was Roy Abernathy, a sales executive with the dubious prior background of Kaiser and Packard.

Almost simultaneously, AMC switched roles. From an exclusive supplier of reliable-but-dull compacts, the firm moved toward a broad product line meeting the Big Three across the board.

The AMC Javelin was not Roy Abernathy's kind of car, and by the time it arrived, he'd gone. He had been blamed for setting AMC on an ultimately fatal course, first because his board asked for it, secondly because there were few alternatives.

They'd been first out with a compact, but once the Big Three entered that market, Rambler sales bombed. You can have a good idea, even if you're small. But, as Rich Taylor once commented, "you'll have elephant footprints all over you" before you know it.

But Abernathy's successor, Roy Dikeman Chapin, Jr., welcomed such new product thrusts as the Javelin, which improved morale among AMC stylists. The enthusiasm was not hard to understand, Motor Trend remarked, after you'd met Teague himself: "He sits at his desk, surrounded by models of classic cars, flails his arms and yells with enthusiasm when discussing even moderately exciting ones." 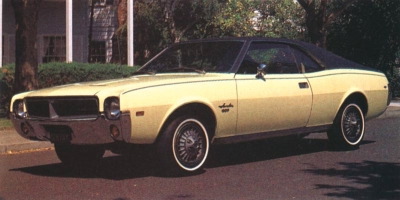 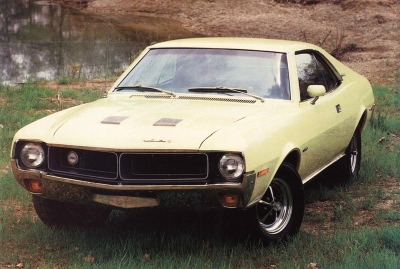 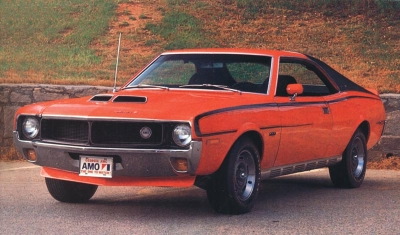 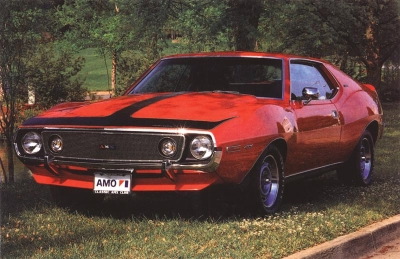