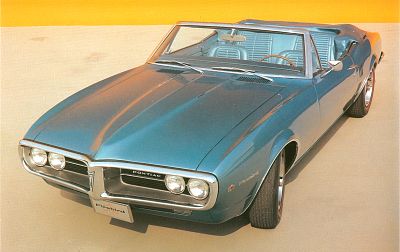 General Motors may be the world's biggest automaker, but it's always had limits. That was true even in the carefree '60s, when GM almost owned the market. Take the 1967-1969 Pontiac Firebird. Had division chief John DeLorean gotten his way, it would have been a two-seat sports car called Banshee, a low-cost sister to the Chevy Corvette. But GM was hard-pressed to support one sports car, let alone two, and "Banshee" didn't test well with the public. So DeLorean settled for a "Pontiacized" version of Chevy's four-seat Camaro -- which was hardly bad.

Camaro stemmed from the "Panther" or "F-car" program that aimed at a direct Ford Mustang-fighter to replace the Corvair Monza as Chevy's mainstream sporty compact. Pontiac was aware of the effort all along, and asked to be cut in once management vetoed DeLorean's two-seater. Firebird was a good name choice, signifying power, beauty, and youth in American Indian mythology and recalling GM's gas-turbine experimentals of the late '50s and early '60s.

Pontiac engineer Bill Collins later stated that the '67 Firebird was "just kind of inherited from Chevrolet." The . . . body had all the Chevrolet sheetmetal and all the same exterior hardware except for the grille and taillamps." Even so, those elements -- split-theme grille, "slot" taillamps -- were distinctly Pontiac, thus differentiating Firebird from Camaro to a surprising degree.

Moreover, Pontiac's pony benefited from some engineering lessons learned too late to affect first-year Camaros, which went on sale some five months before Firebird's February 1967 debut. The most notable were engines set further back for better front/rear weight balance, and standard rear traction bars to minimize axle windup under hard acceleration.

Another distinction involved marketing. Where Camaro achieved four models through options, Firebird arrived with five separate offerings keyed to engines. Each was available in Camaro's convertible and hardtop coupe body styles. The base Firebird carried Pontiac's year-old, 165-bhp 230-cid overhead-cam six. Next came the Sprint, with 215-bhp ohc six, floor shift, and "road hugging" suspension. One step up was the V-8 Firebird 326, billed as a "family sportster. 250 lively horses on regular gas" (and two-barrel carb).

A further notch up was the Firebird H.O., boasting a four-barrel 326 that Pontiac said made it a "285-hp light heavyweight." Topping the line was the Firebird 400 with 325 bhp and available Ram Air induction. Of course, no Firebird wanted for options, which were expected in "ponycars," with plenty for both show and go -- everything from extra instruments and front-disc brakes to short axle ratios and full-house power equipment.

Go to the next page to learn about the 1967-1969 Pontiac Firebird's prices, styling, and performance.

Few styling changes were made for the '68 Pontiac Firebird, but the six-cylinder and base V-8 grew in both size and power.
©2007 Publications International, Ltd.

With prices starting about $200 upstream of six-cylinder Camaros -- $2,666 for the base hardtop and $2,903 for the convertible- -- the 1967-1969 Pontiac Firebird generated strong 82,000-plus sales despite an abbreviated debut season. Though that was only half Camaro's volume, it pushed combined F-car sales well over the projected quarter-million breakeven point to the delight of GM accountants. About two-thirds carried optional power steering and Hydra-Matic Drive, suggesting Firebird competed less with Mustang -- or Camaro -- and more with Mercury's new '67 Cougar in an emerging "luxury ponycar" field.

The big news for '69 was the fire-breathing Trans Am, but all Firebirds sported new lower-body styling that further disguised their Camaro origins. Notable was a more prominent chrome "bird beak" grille surrounded by trendy body-color Endura plastic à la GTO. Unfortunately, the restyle also added somewhat to weight, as well as 2.3 inches in length and 1.3 inches in width. Engines were basically as before except that the Ram Air II gave way to a 345-bhp 400 Ram Air IV option. Sales continued strong, with more than 100,000 units in 1968 and over 87,000 in '69. That was still only a fraction of Camaro's business but roughly even with Cougar's --about what DeLorean had expected.

You don't see that many '60s Firebirds nowadays, not only due to their lower original volume but because enthusiasts long dismissed them as the Camaro-clones they appeared to be. Happily, that's changed, and deservedly so. After all, these Firebirds were Pontiacs, not Chevys, and in the '60s that made all the difference.

Go to the next page to learn the specs of this popular ponycar.

The 1967-1969 Pontiac Firebird was regarded as a "Pontiacized" version of Chevrolet's Camaro -- but it wasn't without its own attractive attributes, including five separate offerings keyed to engine type.