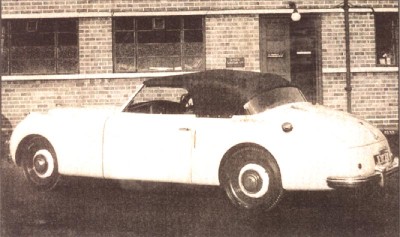 The Saloon was a hardtop version of the Jensen Interceptor Cabriolet.
PIL

With the future looking very rosy -- and the CV-8 looking very dated -- the firm began planning the new 1966 Jensen Interceptor in 1965. Even more ambitious, there would be a second model built with the "Ferguson Formula," the full-time four-wheel-drive system that inventor Harry Ferguson had been evolving since the early 1950s, and with Jensen since 1962. As a preview, Jensen displayed a Ferguson-converted CV-8 at the 1965 Earls Court Motor Show.

While there was never a doubt that the new models would retain the basic CV-8 chassis, styling was hotly debated. The planned pattern was an experimental in-house convertible labeled P66, but its rather bland lines didn't suit chief engineer Kevin Beattie, who insisted that these more upmarket Jensens needed the Italian touch to compete with the likes of Aston Martin, not to mention Latin exotics Ferrari, Maserati, and Lamborghini.

Beattie carried the day with the Jensen board and, after a whirlwind tour of Ghia and Vignale, chose a proposal from Carrozzeria Touring: a shapely fastback coupe of largely squarish appearance, save a rounded tail topped by a huge, compound-curve backlight hinged hatch-fashion.

Alas, Touring was in no position to finalize this design, let alone build it, so Beattie sent the drawings across Turin to Vignale and secured that firm to supply both prototype and initial production bodies, which would be rendered in steel, not fiberglass. A CV-8 chassis was duly sent to Italy in February 1966, and was rebodied by June.

As planned, the new Jensens bowed with a flourish at the annual London show the following October, barely a year since the project had begun -- an astonishing achievement. Even more remarkable, jigs and tools were transferred from Vignale to West Bromwich during 1967, when Jensen took over body construction entirely.

The handsome Interceptor would have been triumph enough for such a small firm, but its all-wheel-drive companion, called the Jensen FF, was a sensation. Both offered great, loping performance with their Chrysler 383 V-8s, slightly detuned from CV-8 form to 325 horsepower (SAE gross).

Also shared were the expected Chrysler TorqueFlite (a manual transmission option was announced for the Interceptor but never offered), plus an improved tubular chassis, rack-and-pinion steering (assisted on the FF only), power all-disc brakes, and an orthodox suspension comprising double wishbones and coil springs in front and a heavy leaf-sprung live axle with Panhard rod location at the rear. Inside was the walnut-and-leather treatment traditional in British cars, sporting or not. In all, the new Jensens were quite something.

But the cars were not without sales challenges. For one thing, Latin-styled Yankee-powered GTs were springing up everywhere. Britain's AC, for example, had just introduced its new Frua-bodied, Ford-powered 428, and even the smaller Italian makers -- Bizzarrini, DeTomaso, and Iso -- had similar cars.

Nevertheless, both of these British newcomers were received with great enthusiasm. If only they could be properly built and prove reliable, they would surely be a great success. Not that they had much of a sales record to beat, for the CV-8 had seen only 391 examples over four years.

Follow the Jensen Interceptor story from 1967-1973 on the next page.