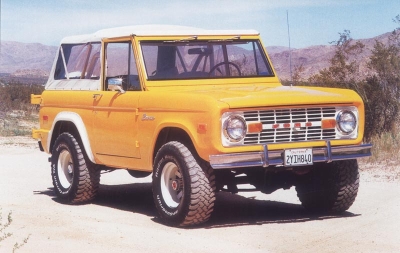 Some owners of latter-day Broncos replaced the wagon roof with a softtop,
©2007 Publications International, Ltd.

The little boom in Bronco demand seen in 1973 wouldn't last, and the 1974-1977 Ford Bronco models would mark the end for the car-based Bronco.

For model-year 1974 (which began under the cloud of the first OPEC oil embargo), production was 18,786. Subsequent years would see further declines.

Then, too, there was very little new. The automatic transmission quadrant was now lighted. The six and optional 4.11 final-drive gear were no longer available in California, where emissions standards were stringent.

The J-shifter was the only setup, even with the manual transmission. The only interior trim color available was parchment.

The 1975 Ford Bronco had a revised exhaust system, stronger rear axle, and a higher ride height. The only engine offered was the 302-cubic-inch V-8, rated at 125 horsepower.

The manual transmission became a special-order item. The six was discontinued due to smog regulations. Anti-smog equipment became standard across the board. (California-bound Broncos came with a required catalytic converter.)

Sports and Rangers were given an F-Series truck steering wheel, and an engine-block heater joined the options list. Production was down to 11,273; base price went up to $4,979.

For the 1977 Ford Bronco, the Ranger package was changed to include a "sports bar," which was a newly styled roll bar. Disc brakes became standard.

The 302-cubic-inch V-8 had a redesigned combustion chamber and new pistons. The intake manifold was improved for better cooling. Horsepower was rated at 133.

The front passenger seat and padded dash, formerly standard items, were moved to the options list. Production fell by a few hundred units to 13,335.

An increase in ride height left drivers of 1975 Ford Broncos riding a little taller in the saddle.
©2007 Publications International, Ltd.

Time and tastes were passing the Bronco by in the late 1970s. When it was introduced, the Bronco had upped the antes in power and comfort compared to its targeted rivals, the Jeep and the Scout. It drew more motorists into the growing sport-utility vehicle market, but it also attracted new rivals of its own.

Vehicles like the Blazer and Jimmy looked like quick fixes at first, but their truck-based designs did include lots of interior space, the ability to carry big engines, and a host of available comfort and convenience features. After a slow start, Blazer production shot up to more than 47,000 for 1972 and kept growing.

When Chrysler entered the SUV field in 1974, it did so with cut-down trucks, the Dodge Ramcharger and related Plymouth Trail Duster. The same year, Jeep released the Cherokee, a detrimmed two-door version of its 4x4 Wagoneer station wagon.

Ford (which had rejected a truck-based design when first planning the Bronco) couldn't ignore the direction the off-road vehicle market was heading. A whole new era arrived in 1978 with the debut of a bigger Bronco derived from the F-Series truck and powered by a standard 351-cubic-inch V-8 engine.

Production soared to more than 70,000 vehicles. But almost overnight, the compact, simple, early Bronco became collectible, and its collectibility has grown with each passing year.

Find information about clubs for fans of the 1966-1977 Bronco on the next page.