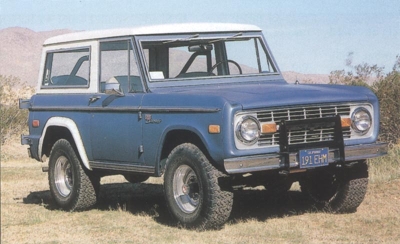 This 1972 wagon was built with the Sport package, a collection of bright trim pieces for civilian Broncos.
©2007 Publications International, Ltd.

Ford Bronco racing results, using cars built by Bill Stroppe, were underwhelming in 1967 and 1968. But things were about to get worse, as the 1969 Mexican 1,000 was marred by tragedy.

Although not officially on the Stroppe team, a youth named Richard Smith drove a Bronco under the Stroppe banner. His co-pilot was Steve Smith, no relation to Richard Smith, but the son of Stroppe's close associate, Clay Smith, who was killed by a flying wheel while in the pits of an Illinois race track in 1954.

Early in the race, the Smiths hit a dune buggy and flipped. Richard Smith was killed instantly; Steve Smith died in the hospital a few hours later.

Stroppe was so devastated, he pulled out of the race. He felt a degree of responsibility because the car was not equipped with a steel mesh plate roof. But since the car was not officially on his team, he could not require this equipment.

Back home in Long Beach, California, Stroppe developed a two-wheel-drive Bronco with much Ford pickup running gear. The rationale for this design was Parnelli Jones's driving style: The Indy-driver-turned-Baja-racer drove the Broncos so hard that the four-wheel-drive front ends couldn't take the beating.

At the same time, Ford introduced a similar Bronco in kit form. Somehow, though, the project was stopped and the one completed kit turned over to Stroppe. It was a 50/50 combination of Bronco and pickup with lots of plastic parts and all-out race-car engineering.

Stroppe called this car "Crazy Colt." He built a second one called "Pony." With Jones driving, Stroppe won the 1970 Baja 500 with the Pony in a record time of 11 hours, 55 minutes.

Jones won the 1971 Mexican 1,000 in a machine that looked like a Bronco but wasn't. His "Big Oly" had an all-tube chassis, plastic body, and advanced suspension.

When the 1972 Baja 500 rolled around, Stroppe entered no fewer than 15 Broncos, F-Series pickups, and compact Courier pickups. Jones finished third with Big Oly, but successfully defended his Mexican 1,000 championship in the same vehicle.

Big Oly won the 1973 Baja 500 but was wrecked in the process. Stroppe and Jones won the Mint 400 in another vehicle.

In the 1974 Baja International (a renamed Baja 500), Stroppe and Jones entered the rebuilt Big Oly. Somehow, a spectator aboard a motorcycle entered the course going the wrong way. There was a terrible collision with Big Oly and the motorcyclist was killed.

After that, Jones eventually drifted over to the Chevy Blazer and Stroppe never rode with him again. However, Stroppe went on preparing Fords -- Broncos, F-Series pickups, and Couriers -- and making impressive showings down on the Mexican peninsula.

To learn about the civilian models of the 1969-1973 Ford Bronco, check out the next page.