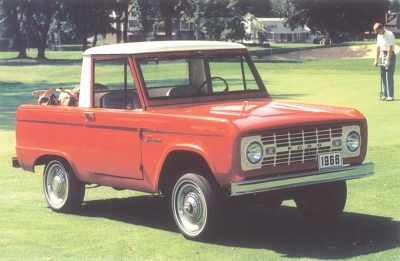 The Ford Bronco was introduced in several body variations for 1966.
©2007 Publications International, Ltd.

The four-wheel-drive 1966 Ford Bronco came on a 92-inch wheelbase and was 152.1 inches long overall. It was powered by a solid-lifter version of Ford's proven 170-cubic-inch overhead-valve six-cylinder engine that developed 105 horsepower at 4,400 rpm.

It was the same basic engine that had been used in Falcons and Econolines, but in the Bronco, there was a different single-barrel carburetor and heavier-duty fuel pump. (In March 1966, the 289-cubic-inch V-8 was made optional.)

While the Bronco was not Falcon-derived in the same sense as the Mustang, it relied heavily on Falcon mechanical components. Ford's reasoning behind using the six was to stress economy and keep the base price down, but at an average of 14 mpg, the Bronco was hardly an economy vehicle.

The sole transmission was a steering column-mounted, fully synchronized three-speed. (An automatic was not available until 1973, and then only with a 302-cubic-inch V-8.) The three-speed's quick shifting and smooth operation were benefits that had not previously been available in four-wheel-drive vehicles.

The transmission tunnel carried a second lever (with a T-handle) that operated the transfer case. The transfer case drove both front and rear axles through constant-velocity, double-cardan universal joints.

This resulted in a higher mounting position and greater ground clearance. A button on the T-handle had to be depressed for the lever to move.

Prior to the introduction of the automatic transmission, one notch back from neutral engaged two-wheel drive, and a second notch further back set the Bronco in four-wheel drive high. A notch forward of neutral selected four-wheel-drive low range, which could only be engaged when fully stopped.

Underpinning the Bronco was a box-section frame with front coil-spring suspension and semi-elliptic rear springs with outboard shock absorbers. Up front, a "Mono-Beam" tubular beam axle was located by two forged-steel radius rods plus a track bar.

The half-ton Ford Bronco was offered in three body types -- a rough and ready roadster with no top, open-sided fairings in place of doors, and fold-down windshield at $2,404; a pickup-like "sports utility" model at $2,480; and a steel-topped wagon at $2,625.

The wagon proved to be the most popular of the three, selling 1,736 more units than the other two models combined in the first year.

Roadsters could be outfitted with a vinyl convertible top or steel doors, the latter with a choice of frameless glass or plastic windows. The 1966 Bronco was offered with five exterior colors and six interior colors.

A Bronco could be ordered as a mini fire truck or auto wrecker. Dealers promoted mowers, power booms, posthole diggers, sprayers and trenchers, and rotary brooms.

It seems Ford was not only competing with Jeep and International but with Sears Roebuck and Montgomery Ward, too.

A steel bulkhead separated the driver's compartment from the 55.2 x 61-inch cargo area; the spare was bolted to the back of the bulkhead. On wagons and roadsters with the rear seat option, the bulkhead was omitted and the spare was mounted inside the tailgate. The pickup and wagon featured bolt-on steel roofs.

In all models the top, doors, and extra seats were designed for quick removal, so even the pickup and wagon could easily be stripped down for weekend action. The side and tailgate windows in the wagon remained stationary throughout the life of the first-generation Bronco, but aftermarket sliding windows were available.

To find out what the critics thought of the 1966 Ford Bronco, keep reading on the next page.