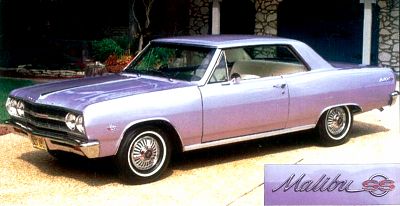 Be it fictional or real, there's something stirring about a great quest. Consider Captain Ahab and his white whale. Then there's Mike Kuhn and his lavender Chevrolet.

Kuhn says he spent about 10 years trying to track down a 1965 Chevelle painted in that year's distinctive shade of Evening Orchid before landing the Malibu SS two-door hardtop seen here. His search ended in Texas in July 1990. Then he brought his prize back home to Trenton, Illinois, to begin nearly two years of restoration.

Evening Orchid was one of 15 colors available for the 1965 Chevelle.
Publications International, Ltd.

Evening Orchid was one of 15 colors available for the 1965 Chevelle, which was in its second season as Chevrolet's entry in the then-new intermediate class. It continued the 115-inch wheelbase from the Chevelle's 1964 debut, but total length grew 2.7 inches, thanks to a more pointed nose and front bumper.

The 1965 Chevelle has ample space in the trunk.
Publications International, Ltd.

Still, overall dimensions approximated those of the well-regarded 1955-1957 Chevys. Underneath the squarish bodywork was a perimeter frame and coil-spring suspension at all four corners.

Chevelles came in four trim levels for 1965 -- the 300, 300 Deluxe, Malibu, and Malibu SS. Of the six Chevelle body styles, Super Sports came only in convertible and hardtop coupe forms.

The SS featured a blacked-out grille and a ring of black paint on the rear cove (except on black cars, which wore a silver band), rocker-panel trim, and special wheel covers. Bucket seats and a full gauge package came standard inside.

Mike Kuhn's Chevelle has four-speed transmission, which brought with it a floor console.
Publications International, Ltd.

Air conditioning, a faux-wood sports steering wheel, tachometer, dash-top clock, and power steering and brakes are among its other options.

The 1965 Chevelle is equipped with a faux-wood sports steering wheel.
Publications International, Ltd.

Though a solid car, Kuhn gave it a frame-off restoration. Since then, it has taken its share of show awards. You don't have to search for a reason why.