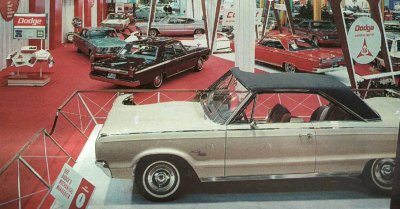 The cutaway Monaco competed at auto shows with advanced concept cars, winning Dodges from the nation's racetracks, and other 1965 Dodges.

The 1965 Dodge Monaco sales results for the United States totaled 13,096 orders, accounting for an impressive 10 percent of big-Dodge output, but still far behind Grand Prix's 57,900 units.

Although battling the GP was tough enough, the Monaco also faced unwelcome and perhaps unwise competition from within its own family. Plymouth's big bucket-seat Sport Fury, for example, sold 44,900 hard-tops and convertibles that year. Worse, for a paltry $192 more than a Monaco, you could buy a non-letter 1965 Chrysler 300, a larger, arguably better-looking car with the added prestige of the Chrysler brand.

And if the truth be told, Chrysler was still the corporation's medium-priced mainstay. Since 1961, Chrysler had offered a Newport sedan aggressively stickered at around $3000 or less -- piranha-like pricing that helped kill DeSoto and seriously hampered Dodge's return to the medium-priced field.

According to former Chrysler planner Gene Weis, this tactic reflected the make's policy of "no junior editions," a derisive stab at the 1961 "senior" compacts from Buick, Olds, and Pontiac. Management felt it better to permit cheaper big Chryslers than dilute the brand's image with little Chryslers. Therefore, the Engel-styled 1965 Chryslers were big, attractive, priced right, and set a production record for the marque.

What did the 1966 model year have in store for the Dodge Monaco? Find out on the next page.