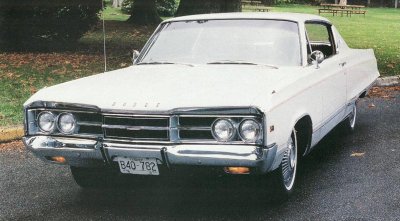 The 1967 Dodge Monaco 500 put on 85 pounds, tipping the scale at 3,970 pounds at its most basic. The broad rocker panel trim design was adopted for Dodge's line leader. Free-standing numerals counted out "500" on the front fenders.

As much as the designers wanted their 1967 Dodge Monaco to keep up with Pontiac's style, those unpredictable Wide Trackers came up with more new big-car styling for 1967, and Grand Prix was again the star.

Not only was the Grand Prix available as convertible as well as a hardtop, it wore extravagant disappearing headlamps and sneaky slitted turn signals into the fender ends above a big bumper/grille. (Dodge cribbed the latter idea for backup lamps on the 1970 Monaco.)

At least the Dodge Monaco finally got its own grille for 1967 -- or rather, its own grille center. This was a rectangle split by a horizontal bar bearing the Monaco crest ahead of a delicate eggcrate, which was remarkably similar to the textured aluminum screening on the Dodge design studio air vents.

"It was Chuck Mashigan who first used this texture for the fender vents on the 1963 Chrysler Turbine Car," reminds designer Diran Yazejian. Dodge designers embraced this eggcrate so enthusiastically that within a few years it appeared on every Dodge grille, save the Dart's.

The big 1967 Dodge vehicles, including the Monaco, looked a whole lot bigger than the 1966, and they were. Wheelbase, for example, went to 122 inches, largely at the insistence of the California Highway Patrol. Like the storied princess who could feel a pea beneath all those mattresses, those CHiPs guys must have been mighty sensitive to want a one-inch longer wheelbase for their Polara patrol cars. Overall length increased more dramatically, stretching over half a foot to 219.6 inches.

Bodyside styling was more dramatic too, thanks to Dick Watson, a talented, friendly guy whose previous work included the 1965 big-Dodge bodyside and front end. As Watson worked it out, bodyside sheetmetal was crisp. A broad, concave chamfer ran along the upper body with a widening taper toward the rear that turned down to match the rear deck plane.

The dual-gauge theme continued on the 1967 Dodge Monaco's dash, but the dials were now in square bezels more integrated into the control panel.

Along the lower character line, in the rear quarter, the surface transformed smoothly into a horizontal skag that ran back into the bumper -- a treatment influenced by the 1965 Pontiac (which had a similar full-length lower skag). On the 1967 Dodge Monaco 500, the entire lower body below a full-length bright molding was paneled with ribbed aluminum, yet another idea inspired by the Bonneville.

Vast planes of sheetmetal made up the hood and trunklid. Rear quarters terminated at a saucy angle. Bob Gale recalls that they were originally more vertical, "but Elwood made us put on more rake to the back end, exclaiming 'That's more 1967!'"

Continue to the next page to get more details about the 1967 Dodge Monaco and 500.