Features of the AMC Marlin 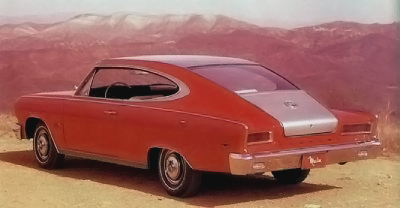 Marlin photos were taken from the three-quarter rear view to highlight the smooth flowing roofline that swept down to the rear bumper line.
©2007 Publications International, Ltd.

The new AMC Marlin was officially announced on February 10, 1965, and unveiled in dealer showrooms on March 1. There was an assortment of deluxe features offered on the AMC Marlin.

It stood 1 1/2 inches higher than the Tarpon, stretched 15 inches longer (to 195), and borrowed its 112-inch wheelbase from the Classic. And although basically a Classic with a fastback roof, the Marlin was marketed as a separate model and sported its own rear fenders, taillights, grille (basically a Classic grille with the vertical bars removed), and hood ornament.

With seating for six, the Marlin offered many deluxe features, among them standard power disc brakes, individual reclining seats, and AMC's 232-cubic inch, 145-horsepower six. For those who desired performance to match the intended sporty image, two V-8s were available: a 287-cubic inch unit rated at 198 horsepower, or a 327-cubic inch engine that cranked out 270 horsepower.

A heavy duty suspension and Twin-Grip differential were also on the options list. In basic form, the Marlin listed at $3,100, only slightly more than the Classic 770 hardtop, which went for $3,063 in six-passenger form and $3,089 for the 770H with bucket seats.

In the press release announcing the Marlin, Coupe was quoted as saying "the new car is designed for those who want a sporty fastback combined with roominess and comfort." That seemed almost an apology since surveys had shown that sports car lovers did not necessarily seek roominess and comfort as much as they demanded sleek looks and high performance.

Bob Nixon, now chief of Jeep design for Chrysler, worked on the Marlin, along with Vincent Geraci, Fred Hudson, Neil Brown, Don Stumpf, and Jim Pappas -- all under Teague's watchful eye, of course. Nixon was quoted saying that their assignment to create a sporty fastback on the Classic platform "was like trying to build a Corvette on a Buick sedan body. It just doesn't work." He dismissed the Marlin project as an "ugly embarrassment."

Geraci, now chief of product design and product identity for Chrysler, was a little kinder. "It was an exciting program," he said. "We took a 1965 body design and turned it into a sportier version. But enlarging the car from its original concept [the Tarpon] and raising the roof produced an adverse effect on overall appearance." He indicated that one of his major tasks, hard to stomach, was to provide sedan-type seating in what was supposed to be a sports-type car.

Continue on to the next page to learn about the mixed press reaction to the AMC Marlin.