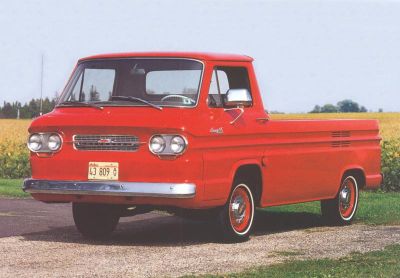 Corvair, Chevrolet's first compact car, featured a rear-mounted, air-cooled engine like the VW Beetle. Chevy followed the German company's lead further by turning the Corvair into a van and a pickup with the 1963 Chevrolet Corvair 95 Rampside Pickup.

Conversion from a sedan to a van/pickup involved moving the driver seat forward over the front wheels. Total length stayed at 180 inches, but wheelbase actually shrank from 108 to 95 inches.

In the event of a crash, the driver's feet were dangerously close to front bumper, but behind him was a truck bed 105 inches in length or, in the van, a load deck 114 inches long. The Corvair Greenbrier wagon could be fitted with three rows of seats -- offering the room and versatility of a minivan.

The commercial series was badged "Corvair 95" for its wheelbase. Three models were offered -- Corvan, Loadside, and Rampside. The Corvan was a panel van. The Loadside was a pickup with conventional double-walled box and rear tailgate, while the Rampside added a door on the right side of the bed that folded down to form a ramp.

The Rampside had a door on the side of the truck bed that could be used as a ramp.

Unique to Corvair, this feature allowed heavy loads to be rolled instead of lifted into the bed, and Chevrolet sales literature never missed a chance to illustrate it. The top edge was covered with rubber to protect it when lowered to the ground or curb.

The cargo bed was longer than a conventional truck's bed, but wasn't level. The rear half of the floor had to be raised to clear the engine.

Fortunately, the Corvair's six wasn't very tall. Two horizontal banks of cylinders faced each other with the crankshaft in the middle. Chevrolet knew that a heavy engine mounted in the rear would be trouble for handling, and extensive use of aluminum kept weight down -- although some argued that handling was still a problem.

The 95 Pickup's engine was made of a lot of aluminum to keep weight down, but handling was still an issue.

Unusual for an American economy car, the Corvair had dual carburetors. The compact 145-cid unit put out 80 horsepower and, important for a truck, 128 pound-feet of torque. A top-mounted fan provided the air for the air-cooled engine.

In 1960, Chevrolet was the first major truck builder to switch to independent front suspension. The Corvair 95 went the full-size trucks one better by offering full independent suspension via the swing-axle rear suspension shared with Corvair sedans. In spite of its passenger-car origins, the Corvair 95 pay-load was comparable to full-size Chevy trucks.

The truck's interior was basic, with a radio and four-speed transmission.

Ford introduced the Falcon-based Econoline at the same time. Just as the conventionally engineered Falcon outsold the Corvair, the Econoline beat the Corvair 95. Chevrolet fought back with a front-engined Chevy Van in 1964, but without a pickup version. Corvair van and pickup production ended that year, although some Greenbrier wagons were sold as 1965s.

The 1963 Rampside pictured here features a radio, chrome bumpers, and the four-speed transmission.