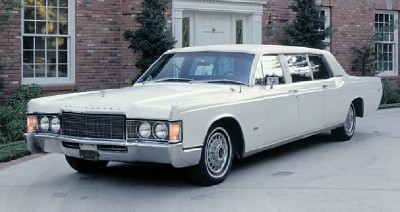 Lehmann-Peterson's output of limos for 1969 increased slightly from the year before, to 93.
©2007 Publications International, Ltd.

The 1969 and 1970 Lincoln limousine saw production rise and fall. In 1969, production rose slightly to 93 units. Aside from making Executive Limousines, Lehmann-Peterson also dabbled with the idea of converting Lincoln's new entry in the "personal-luxury" field, the Continental Mark III hardtop coupe, into a four-door sedan.

Such a car was built for Ford Product Planning, equipped with the Mark III's narrow grille and hidden headlights, wheel covers, trunklid with tire hump, rear bumper, and taillights. Like the Ford Thunderbird four-door sedan, it had frameless door glass and rear "suicide" doors.

The idea never went any further than that as far as becoming a factory-built Lincoln. However, that didn't stop Lehmann-Peterson from making one to order for a paying customer.

The 1969 Lincoln limousines were the last Continentals with both unit-body construction and rear-hinged suicide doors in back.
©2007 Publications International, Ltd.

In a March 20, 1970, letter to prospective client Grover Hermann, the former chairman of Martin-Marietta Corporation, George Lehmann explained that such a car had just been completed for Henry Ford II at the cost of $13,000. Included with the letter was a snapshot of the car. (Another Lehmann-Peterson photo exists showing a 1969 Mark III four-door nearly completed.)

Hermann chose to have one built for himself, and it was finally delivered late in the year. Some of the more obvious differences were a 7.3-inch body stretch, rear-seat cushions intended to allow for armrests, and 1971-style back-up lights per a mid-year change.

Curiously, Ford Motor Company has denied the first four-door Mark was ordered by, let alone built for, Henry Ford II. (A rumor at the time was that it was a gift to a foreign nonrelative female.) Perhaps this was the Product Planning car.

The last Lehmann-Peterson Lincoln Continental Executive Limousines were produced in 1970. That year, the big Lincoln reverted to separate body-and-frame construction, dropping the unit-body configuration used since 1958.

With this change came new styling, a backward step that tended to make Lincoln look less distinctive. Gone were the graceful rear-opening back doors, for example, which provided the only proper way to enter and exit a limo. Still, Peterson deftly worked out how to lengthen body and frame on this new-style Continental.

Unfortunately, fewer than 20 Executive Limousines were made for 1970. This was hardly the only problem that faced Lehmann-Peterson, either. Near the end of 1969, automakers found themselves running into a barrage of new federal safety standards, the impact of which on the way they did business was uncertain.

This factor more than any other forced Ford's hand in deciding to deny Lehmann-Peterson any more support. The risk of the unknown was just too great when faced with potential liability from a car that wasn't even produced under its own roof.

The final Lehmann-Peterson limousines were made in 1970 from the new body-on-frame Continental.
©2007 Publications International, Ltd.

In fall 1970, Lehmann-Peterson was forced to close its doors. The company's taxes hadn't been paid for the last couple of years, so the government foreclosed. Most employees left to work for competitors. Lehmann tried to make a go of things on his own, but the brass ring never came around again.

In a few short months, he entered the hospital for the last time and spent a solid year there. Having slipped into unconsciousness, George Walter Lehmann died of a brain tumor on April 6, 1972. He was only 33.

The lengthy hospitalization took its toll on Morella Lehmann. During that time, she contracted a near-fatal case of hepatitis. Upon her recovery, she continued to live not too far from where "it" had all begun in Chicago until she died on August 7, 1989.

Robert Peterson later went on to produce Cadillac limos for Maloney Coachbuilders, also in the Chicago area. He died in January 1995.