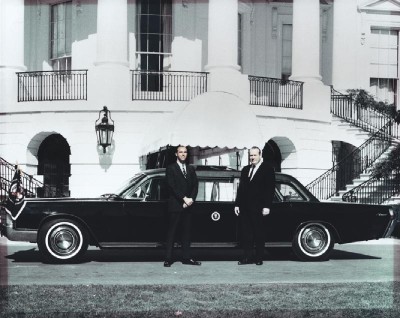 George Lehmann (left) and Robert Peterson pose at the White House with the presidential limousine they were contracted to build.
©2007 Publications International, Ltd.

The 1968 Lincoln limousine turned out to give another banner year for Lehmann-Peterson -- but not in sales, although a healthy 91 units were built.

Rather, it was due to the notoriety of the new presidential limousine. Planning, research, development, and construction of this masterpiece took more than 15 months in 1967 and 1968. Its price -- $500,000 -- put it in the Guinness Book of World Records.

Some of that considerable cost was explained by the fact that the limousine had more than two tons of armor and a fighter-planelike canopy. (In fact, the windows and canopy were thicker than the glass used in U.S. Air Force fighters.) This shielding could stop a .30-caliber rifle bullet or a barrage of Molotov cocktails.

The car ran on four heavy-duty truck tires; inside of each was a large steel disk with a rubber-rimmed tread, which allowed for driving up to 50 miles at top speeds with the tires flat.

This car replaced the $25,000 limo that President John F. Kennedy had commissioned in 1961. It didn't even have bulletproof glass until after he was assassinated in 1963 and Ford spent $300,000 to partially armor-plate it in a 1964 revamp.

Of the presidential limo, Skip Lehmann said, "It is designed to look like a perfectly normal car one minute, and the next minute it will look like no other car you ever saw before." The interior featured the two inches of added headroom optional in "civilian" Lehmann-Peterson limousines. The car was not unlike a communications center, with "the button" always within arm's length in the event that a national security crisis should arise while the president was riding in it. Like the two Secret Service vehicles, it was a 1967 car with updated appearance details.

Ford Motor Company absorbed the estimated $500,000 in cost and then leased the car back to the government for a nominal $100 per month. Delivery to President Lyndon Johnson was scheduled for August 1968, but its arrival was delayed until October, by which time the car was updated again with 1969 styling touches. Its first use the following month actually wasn't by the nation's sitting chief executive, but by President-elect Richard Nixon, who was in Washington to visit Walter Reed Army Hospital.

The 1968 Lincoln limousine started with a 462-cubic-inch V-8 that was superseded during the year with an all new 460 that made 365 horsepower.
©2007 Publications International, Ltd.

Notably, 1968 also saw the first major round of federal auto safety regulations that were destined to have an extensive impact on the industry as a whole. Because of their low annual production, Lehmann-Peterson limousines were excluded from any kind of government crash or endurance tests.

Ford, however, wanted the first limo produced every model year for its own tests and held it to a higher standard than even the production cars. (This goes a long way in explaining why so many Lehmann-Peterson limos have survived.) Then, in 1966, a driver fell asleep during a simulated 100,000-mile run and plowed into a ditch. Except for the passenger compartment, the car was a total loss. Ford deemed the annual high-mileage testing unnecessary after that; driving a new limousine into a fixed barrier at 35 mph every year would take its place.

Even though the Lehmann-Peterson limos passed every test given them, it's believed that a fear of the unknown gave Ford an excuse to begin withdrawing support from the limousine program. By 1970, the firm would lose all financial backing. But that was still a couple of years in the future.

In the meantime, Lehmann-Peterson was as strong as ever, and both partners believed their company could make a go of it independently if need be. Plans for expansion were discussed, perhaps into Mexico to take advantage of a strong U.S. dollar and inexpensive labor.