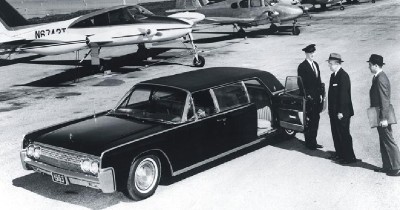 Lehmann and Peterson were contracted by Ford to produce a pair of limos built to 1963 specs for testing.
©2007 Publications International, Ltd.

Based on the test results and Skip Lehmann's enthusiasm, Ford signed a contract and immediately ordered two more 1963 Lincoln Limousines based on the 1963 Lincoln adapted by Lehmann and Peterson. They were also tested by Ford and driven at least 100,000 miles each.

It was these cars that were used in all the early advertising, as Lehmann-Peterson did none of its own. An added stipulation was that the two cars never be sold to the public.

And so, in 1963, Lehmann-Peterson was in the limousine business. A regularly updated survey begun by Lincoln and Continental Owners Club (LCOC) member H.W. Schofield revealed that two additional 1963 limos were produced for public sale; other records indicate that one of them was bought by comedian Jerry Lewis. In 1964, Lehmann-Peterson and Company became Lehmann-Peterson, Inc., "Builders of the Lincoln Continental Executive Limousine and Automotive Specialties."

The limousines and special projects were handcrafted with state-of-the-art coachbuilding techniques. Ordering was done by picking out a car at a Lincoln-Mercury dealership and choosing from the vast Lincoln and Lehmann-Peterson options lists.

At the factory, Ford would install a "Limousine Conversion Kit" consisting of a beefier suspension with an added leaf spring in the rear and stiffer front coils, heavy-duty shock absorbers, and larger tires. Lehmann-Peterson would then strip the car, cut it in half, and add a section between the front and rear doors.

From 1964 on, this added section was 34 inches long, which produced a wheelbase of 160 inches -- though at least two cars were built with a stretch of just nine inches for owners who wanted something that would be appropriate as a chauffeur- or owner-driven car.

Apart from a lengthened driveshaft, the powertrain was stock Lincoln. This included a 430-cubic-inch V-8 good for 320 horsepower through 1965. A 340-horsepower version of this engine enlarged to 462 cubic inches served from 1966 through early 1968 when it was replaced by a completely new 460-cube V-8 that made 365 horsepower.

Although Ford built the Lincoln Continental to extremely high standards of body rigidity, annual testing revealed that after conversion, the limousines were even stronger. Because of this, Lehmann-Peterson was the only coachbuilder granted the right to have its cars covered by the same Ford Motor Company warranty as the factory-produced cars. Furthermore, Lincoln began advertising the limos in its brochures in 1965 (though for some unknown reason they weren't included in the 1968 and 1970 literature).

From the beginning, Lehmann-Peterson reached exciting new heights of luxury. For example, the eight-passenger seating arrangement allowed all passengers to face each other rather than stare at or talk to the back of someone's neck. The options list tested the buyer's imagination. After piling on what Ford had to offer, then came Lehmann-Peterson's list.

First there were the no-charge items, like a chauffeur's "escort umbrella harnessed below front seat" for nasty-weather days, or the choice of an AM/FM signal-seeking radio with power antenna or AM stereo tape player for the rear compartment.

To follow the story of the Lincoln limos into 1964 and 1965, continue to the next page.