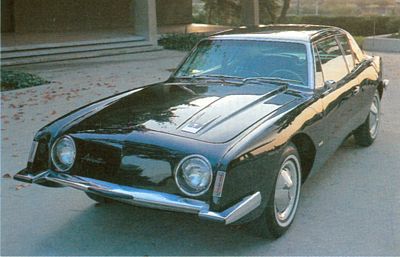 While he had Milwaukee-based industrial designer Brooks Stevens working on emergency updates of the Lark and Hawk, Studebaker president Sherwood Egbert called in Raymond Loewy to design a new generation of Studebaker passenger cars. Loewy, who hadn't worked for Studebaker since 1956, jumped in with enthusiasm, promising Egbert a sporting coupe of revolutionary design, from which a complete line of family cars would evolve. Studebaker quit before the family cars were finished, but Loewy did give Egbert one brief shining moment with the memorable 1963-1964 Studebaker Avanti.

Designed in seclusion by Loewy's talented team of Bob Andrews, Tom Kellogg, and John Ebstein, the Avanti (the Italian word for "forward") was a styling sensation. A coke-bottle waist formed the base for a thin-section roof with a huge rear window and a built-in rollbar. Razor-edged front fenders swept back into the curved rear, then into a jacked-up tail. Loewy threw out the conventional grille, putting an air scoop under a thin front bumper, and an asymmetrical hump in the hood. Inside, ample crash padding was combined with four slim-section vinyl bucket seats and an aircraft-style control panel. The whole package was accepted for production with hardly any changes from Loewy's small-scale model.

For reasons of cost and time, Studebaker decided to build the Avanti's body out of fiberglass. It would need a stout platform, so chief engineer Gene Hardig took a beefy Lark convertible frame, shortened and modified it, and fitted anti-sway bars and rear radius rods. The Bendix disc brakes used on the Avanti (as well as some Larks and Hawks) were the first caliper discs in domestic production. The engine was the best V-8 Studebaker had, the faithful 289, which developed 240 bhp in standard ("R1") tune thanks to a 3/4 race high-lift cam, dual-breaker distributor, four-barrel carb, and dual exhausts.

Andy Granatelli and Paxton also developed a supercharged "R2" with 290 bhp, and a bored-out 304.5-cid version in three higher stages of tune: R3, R4, and R5. Only nine supercharged R3s were built (with a claimed 335 bhp), and the R4 (unsupercharged) and R5 were experimental. The latter had two Paxton superchargers, one for each cylinder bank, magneto ignition, and Bendix fuel injection. It developed an incredible 575 horsepower.

The 1964 Studebaker Avanti was little changed from the '63 version, though it now had square headlight bezels.
©2007 Publications International, Ltd.

The 1963-1964 Studebaker Avanti had a remarkably slippery shape, even though designer Raymond Loewy had not had time for wind tunnel testing -- he just guessed! In late 1962, Granatelli broke 29 Bonneville speed records with an Avanti R3, traveling faster than anyone had before in a stock American car.

Unfortunately, Studebaker failed to deliver Avantis to dealers fast enough to satisfy the initial wave of orders. Unexpected distortion during the fiberglass curing process accounted partly for the delay, forcing the firm to add its own fiberglass body facility. By the time all the bugs were out, most of the customers who'd placed advance orders had given up and bought Corvettes or imports. Fewer than 4,600 Avantis were produced during 1963. Production had already ceased by the time Studebaker stopped car production in South Bend in December 1963.

Despite slow sales, Studebaker made numerous detail changes to the Avanti beginning as early as July 1962. Officially the car was "not designated by model year, but incorporates changes whenever appropriate." The only determination of dating was the registration date, which designates 809 Avantis as 1964 models. A rule of thumb, though not exactly accurate, is the square-bezel headlamp style, which appeared along with most detail changes in August 1963 for the "1964" models. But Studebaker's first announcement was that these were optional, and some round headlight cars were registered as '64s.

When Studebaker abandoned the Avanti after 1964, two partners in a Studebaker dealership, Leo Newman and Nathan Altman, purchased the manufacturing rights. They formed the Avanti Motor Corporation and resumed building the car in an abandoned Studebaker plant, thus reviving one of the decade's great designs.

Get the mechanical and production specifications for the 1963-1964 Studebaker Avanti on the next page.