Reaction to the 1962 Chevrolet Chevy II 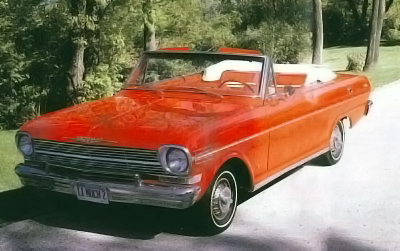 "Flat out, which with Powerglide was 91 mph, this little car never wavered and even over some rough strips it was one of the safest feeling 91's I have ever driven." The styling reminded "Uncle" Tom of a "small Mercedes-Benz," and he concluded that "with a little hopping up, a stick shift and its low price, it should sell like cold beer on a hot Fourth of July."

Car Life was even more enthusiastic, honoring the Chevy II with its Award for Engineering Excellence. "We think the Chevy II, in either 4- or 6-cylinder form, represents an important development in the American automotive field," reported the magazine. "We think it represents a return to sensibility in terms of basic transportation; it is a car of reasonable size, adequate performance and simple elegance."

Consumer Reports described the six-cylinder Chevy II as an "ultra-sensible, conventional car with outstanding interior space," but also reported "higher than average" interior noise levels. There were also complaints about the four-cylinder version's lack of refinement. "CR hesitates to recommend the Four for normal use. The Four is an excellent hackabout for specialized local use -- if you can stand the vibration."

McCahill put it this w­ay: "The four wasn't the smoothest four I have ever driven, but it had nice response and will probably still be running long after Castro shaves his beard off." Okay ...

Motor Trend called the new Chevy II "a most straightforward car -- simple, honest and conventional." Editor Jerry Titus was fascinated with the new single-leaf rear suspension: "How it actually works seems almost contradictory. There is a great deal of body roll, but the car does not feel unstable. The ride is soft and pleasing, but not seasick-soft with the constant pitching and rolling that some cars have."

­Interior room, steering, and brakes were commended. Performance was rated as "moderate" for a six-cylinder Nova convertible with Powerglide: 0-60 came up "a shade under 16 seconds," and the top speed was reported to be 98 mph, but Titus felt that "the car seems at its best below 75, where it did not feel as though it was working hard."

In the marketplace, the 1962 Chevrolet Chevy II did exactly what it was supposed to do: model year production totaled 326,607 units. Of these, 59,741 were Nova Sport Coupe hardtops, 23,741 were convertibles -- the latter a surprisingly high figure for an economy car.

More than 86 percent were equipped with the six-cylinder engine. Best of all, Chevy II represented more "plus" business for Chevrolet. Corvair's 1962 model-year sales reached a high of 292,531, and with 1,424,008 full-size models built, Chevrolet increased its lead over second-place Ford to nearly 600,000 units.

It was a sales achievement of historic proportions, with Chevrolet Division copping 30 percent of the U.S. market. Fortune magazine reported that "total [1962 Chevrolet] sales came to 2,078,029 units. This is more than Chevrolet sold in the record car year of 1955, and is a world record for sales of a single make of car."

Meanwhile, in the Ford camp, it seemed like 1960 all over again. Falcon sales slipped a bit to 396,129 units, but the new-for-1962 intermediate-sized Fairlane cut into Galaxie volume, so Ford's overall market share was down sharply.

Continue to the next page for details on the 1963 Chevy II.