The Final Days of the 1964 Studebaker Gran Turismo Hawk 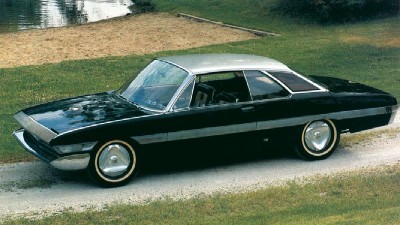 The Gran Turismo Hawk replacement, the Sceptre featured many innovations, but came too late to save Studebaker -- only one prototype was built.
©2007 Publications International, Ltd.

Inside the 1964 Studebaker Gran Turismo Hawk, three-point rotating door handles -- similar in design to the steering wheel -- set a futuristic theme. The ribbed metallic/vinyl seats helped keep one's body cool and comfortable. The instrument strip and console leaned in a curve toward the driver. Four instruments were located in clear plastic hemispheres aligned in a row on the dash, clearly visible from any position. Behind them, on a pedestal, the angle of the slide-rule-style speedometer could be adjusted to suit the driver.

On the passenger side, a spacious lighted-mirror vanity case could be pulled forward for convenience. The Sceptre was not only beautiful, it was designed to be practical, both for the owner and for the ease of manufacture. Stevens had paid careful attention to saving tooling dollars; interchangeability of parts and a reduction in the number of manufacturing dies were vital because of Studebaker's limited funds. Thus, doors were made as mirror images of each other and trunk lids and hoods were the same, keeping the number of unique stampings to a minimum.

But it was already too late. Sherwood Egbert fell ill with cancer. He had surgery, recovered, relapsed, and finally had to resign (tragically, he died soon after, at an early age). Studebaker's money was so low by now that the writing was clearly on the wall.

The Gran Turismo Hawk was dropped for the 1965 model year. In fact, it never finished out 1964 -- Studebaker had quit production in South Bend in December 1963 to consolidate operations in its Hamilton, Ontario, plant. No matter how beautiful the car, how spectacular its performance, or how much praise the critics heaped on it -- and they did -- buyers were afraid to buy what might become an "orphan." Total sales of the Gran Turismo Hawk for all three seasons reached only 15,736, including export models. Compare that to 92,843 Thunderbirds in 1960 and over 40,000 Buick Rivieras for 1963.

After South Bend closed, Brooks Stevens carried on with minor face-lifts for the Lark and Wagonaire, the only cars Studebaker still produced. He was able to bring off some minor wonders, and he had earlier managed to introduce his dashboard vanity and the sliding rear station wagon roof of the Turin prototype, but that was about it.

Ironically, Studebaker's death struggle and Sherwood Egbert's herculean efforts to keep it in the car business provided two wonderful automobiles: Loewy's Avanti and Stevens' Gran Turismo Hawk. Stevens can be proud that the simple, elegant beauty of his Gran Turismo Hawk will always have appeal because of its purity of line. Had Egbert survived to take Stevens' Sceptre and the other two cars to production, perhaps Studebaker would have recovered and still be building cars today. The working prototypes survive and can be seen "in the flesh" at the Brooks Stevens Museum in Mequon, Wisconsin. Looking at them, one can tell that Studebaker had been at yet one more crossroad -- and had chosen the wrong turn.