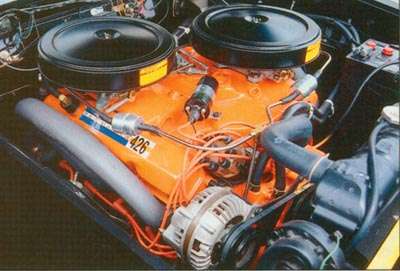 A new 426-cubic-inch "Ramcharger" engine made at least 415 horsepower with dual carburetion.

With the 361 V-8 restricted to the 880/Custom 880, the 1963 Dodge Polara 500 engine options started with the base 305-horsepower, two-barrel 383. Also available was a hotter version of the 383, fitted with a "Power Pak" consisting of a high-performance cam, dual-breaker distributor, twin exhausts, and four-barrel carburetion good for 330 horsepower.

Motor Trend tried one of these with a four-speed and hit 60 mph from a standing start in 7.7 seconds and ran the quarter-mile in 15.8 seconds -- even with a less-than-racy 3.23:1 final drive. Testing at Riverside International Raceway, MT got its 4,400-pound Polara 500 convertible up to 116 mph on the track's backstretch.

Replacing the 413 were two mammoth, special-order Ramcharger 426-cubic-inch V-8s. The lesser of the two boasted 415 horsepower, 11:1 compression ratio, "pop-top" aluminum pistons, hand choke, and two four-pot Carter carburetors. Its big brother toted 10 more horses, 480 pound-feet of torque, and an awesome 13.5:1 comp ratio. High-octane fuel of 102 or higher was required. Dodge warned prospects that "With its 426 cubic-inch displacement, the 425 horsepower comes so close to matching displacement that this one creates an irrefutable thunder that speaks with authority on any drag strip."

To increase power output in the high-performance ranges above 4,000 rpm, both engines featured short-tube ram-induction manifolds and upswept exhaust. The manifold assembly was fitted snugly between the two cylinder banks, with the bottom side serving as the engine's tappet cover. The compactness of the ram manifold made possible the use of maximum-performance engines within the narrower confines of B-body engine compartments.

Unlike the system used on that year's Chrysler 300-J, there was no provision for manifold heat. While most Ramcharger wedge-head engines were stuffed in stripped-down 330 two-door sedans (in which they carved out an enviable drag-racing reputation), five Polara 500 hardtops were ordered with the 426 engine option.

Several transmissions were mated to these engines, including a new Borg-Warner T-10 four-speed manual for use with V-8s, but not recommended for use with the 426 maximum-performance engines. Chrysler's own A-745 heavy-duty three-speed manual was also offered in four variations, but not with the 426. This tranny was available from the factory with a Hurst floor-shifter conversion unit.

Standard transmission with the 426 V-8s was the Borg-Warner T-85 three-speed manual with a Hurst-Campbell floor unit for faster shifting. On TorqueFlite automatics joined to a 426 engine, a high-speed governor was used to delay upshifts to a higher engine rpm. All TorqueFlites also featured a new parking sprag, activated by a lever adjacent to the transmission pushbuttons, to be used in lieu of the handbrake to hold the car in place while parked.