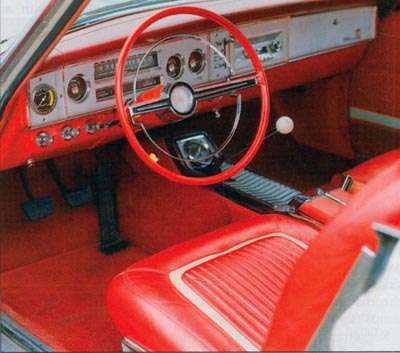 A more-conventional instrument panel and a new console were used inside the 1964 Dodge Polara 500.

A gold Pentastar logo -- Chrysler's new corporate mark -- was added to the lower right fender just behind the front wheel opening of all the corporation's cars midway through the 1963 Dodge Polara 500 model year. The Pentastar was deliberately placed on the passenger-side fender only, inasmuch as this was the curb side and thus more likely to be noticed by passersby.

Although its unique exterior trim was eliminated, the 1964 Dodge Polara 500 retained its distinctive interior. The use of contrasting color on the vinyl bucket seats was confined to narrow U-shaped accent bands that separated the smooth bolsters from the seats' vertically pleated inserts. Six basic interior colors were available, including black. When vice president of design Elwood Engel arrived at Chrysler, he was astonished to discover that there were no black interiors extant and quickly made sure black was added as a color choice in 1964.

Much to the dismay of people who still regarded themselves as sons of "The Forward Look," 1964 saw the last of Chrysler's vaunted automatic-transmission pushbuttons. On 500s, they were already gone, thanks to a new floor console that housed four-speed manual or TorqueFlite shift levers, with a provision for a tachometer at the console's forward end. The new B-body console also included a new padded armrest with lockable storage below.

Underhood, engine choices were basically carried over from 1963, but the base 426-cubic-inch wedge engine was now a more-tractable version with a single four-throat carburetor, milder cam, 10.3:1 compression ratio, and 365 horsepower. (When any 426 was ordered, beefier brakes were included.) A new four-speed manual transmission, the Chrysler-designed A-833, boasted 11 percent greater torque capacity than the Borg-Warner T-10 it replaced.

Two special versions of the A-727B TorqueFlite were available for use with the more-potent of the 426 engines. Motor Trend returned to Riverside in a Polara 500 -- this time with a 365-horse 426 four-speed hardtop -- and reprised its 7.7-second 0-60 run from 1963. The quarter-mile time was slightly higher at 15.9 seconds, but top speed climbed to 118 mph.