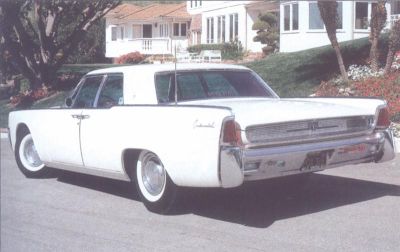 In Lincoln vice president Robert McNamara's biweekly meetings with the engineering team for the 1961 Lincoln Continental, the topic of discussion was almost exclusively how to solve past problems, especially those that had resulted in perennial large losses.

The 1958 Lincoln had originally been planned for a 126-inch wheelbase, but was subsequently increased to 131 inches so the engine could be moved five inches forward to make the transmission hump lower.

Because the 1961 Continental was to be shorter, the engine and transmission had to be moved as close to the firewall as possible. That meant that the transmission hump in the front-passenger compartment became huge, threatening to limit passenger capacity to four instead of six, something unacceptable for a Lincoln.

One of the problems Harold Johnson had to solve as chief engineer at Continental Division was a tendency for the Mark II driveline to vibrate. He asked Dana Corporation to come up with an inexpensive constant-velocity, double-cardin universal joint. It never was used on the Mark II, but it was revived for the 1961 Lincoln, where it allowed the transmission and the propeller shaft to be angled downward.

The end result was that the 1961 Continental was built on a 123-inch wheelbase, yet remained a six-passenger car.

At one of the biweekly meetings, McNamara brought up the subject of Lincoln quality -- or what he saw as a lack thereof. With chief engineer Harold MacDonald and Johnson's enthusiastic support, vendor cooperation, and new testing methods, a 24,000-mile warranty and even universal oil standards were pushed through as standard features on the 1961 Continental.

At 25,164 units, the 1961 Continental sold slightly better than the 1960 Lincoln and Continental. But in a weak year for the industry, that modest increase amounted to a 60-percent gain in market share.

More importantly, the profit the new-style Continental made ($20 million between 1961 and 1964), the praise it received, the design awards it won, and increasing sales over the next decade assured that Lincoln would survive.