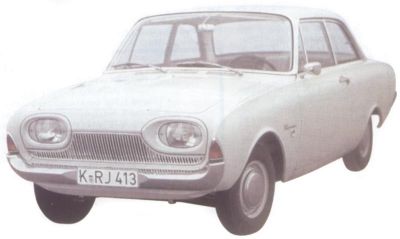 The Taunus 17M may have colored Elwood Engel's thinking for his 1961 Ford Thunderbird design.

How the proposal that Elwood Engel's design studio intended as a Thunderbird became the 1961 Continental first requires some explanation of the difficulties Joe Oros' Ford Studio designers had in coming up with an acceptable design for the 1961 Thunderbird.

By 1958, the new Ford Division head, Jim Wright, had decided that the 1961 Thunderbird had to be even sportier than the previous model. Design vice president George Walker and Oros didn't agree, but since Wright supposedly had the last word, Oros directed his designers to begin work on a sporty new four-passenger Thunderbird.

The design of the 1961 T-Bird didn't come easy, but after many renderings and 3/8-scale clay models, the design direction was reached during an all-night session in which designers Bill Boyer and Jim Powers developed a full-sized clay model that established its basic lines.

Because the Ford Studio was having so much trouble establishing a design direction for the 1961 Thunderbird, Engel decided to design his own competing proposal.

According to a narrative statement Engel gave the Henry Ford Museum in June 1984, after he returned from his oversight trip to Cologne, Germany, he asked Walker if he "could have a studio to develop an idea for a new Thunderbird." Engel was given a small room in the basement of the Styling Center. (The room left barely four feet on either side of a full-sized clay model.)

The site was nicknamed the "stiletto" studio by designer Colin Neale and, even though it was later claimed that the name referred to the long, narrow layout of the room, Neale now acknowledges that the name was coined as an irreverent jab at the production studios with which they were competing.

Engel decided to base his 1961 Thunderbird proposal on the recently discontinued Continental Mark II; the Orfe/Payne proposal; the Quicksilver, a concept car designed in the Ford Studio that eventually became the 1960 full-sized Ford; and a smattering of features from the Taunus 17M.

The designers assigned to the project were all handpicked. They included John Najjar, Neale, Orfe, and design analyst Bob Thomas. Designers Dick Avery, Gale Halderman, and Phil Payne -- Howard Payne's younger brother -- came into the studio as the car was nearing completion, but they did very little work on it.

Orfe was assigned to supervise the clay modeling. Harry Strickler was the lead modeler on Engel's 1961 Thunderbird proposal, and on all the changes the car went through in the studio on its way to becoming the 1961 Continental.

Studio clay modelers who worked on the car during its various stages included Seibold, Cecil Perkins, Ross McLean, Art Rockall, Wolfgang Konietzko, Ray Trombley, Rolland McDonald, and Toby Melone. The stiletto studio designers all confirm that Engel, too, spent much of his time as a hands-on designer working on the alternate 1961 Thunderbird proposal.

Preparing the package layout for the 1961 Lincoln Continental would prove challenging for the design team. Continue reading for the details. 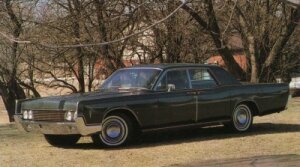