The Success of the 1961 Pontiac Tempest 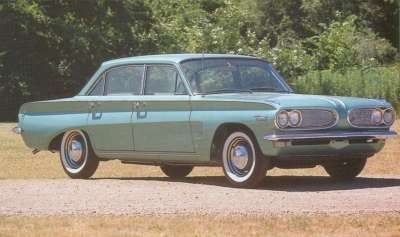 The Pontiac Tempest won praise from drivers and journalists because its style and handling.
©2007 Publications International, Ltd.

The 1961 Pontiac Tempest did not fail to impress when it was introduced along with the full-size 1961 Pontiacs on October 6, 1960. Road testers were quick to praise Pontiac for its innovation and sensible packaging. Most enjoyed the Tempest's ride quality, nimble size, and the slant-four's power output. Interestingly, the consensus was that the automatic was the better choice for all-around performance, due to its quieter operation and the extra power from the hotter cams used.

On the negative side, the power steering was seen as unnecessary, slow, and lacking in road feel. Journalists also criticized an abrupt loss of rear-wheel traction at the limit of adhesion. This was a byproduct of the softly sprung swing-axle suspension, which would put the rear wheels in a positive-camber situation and greatly decrease tread contact with the road.

Still, the positive feedback was stronger than the negative, strong enough, in fact, for Motor Trend to award its "Car of the Year" honor to the 1961 Tempest, the second such award to Pontiac in three model years. MT editor Don Werner summed it up in the March 1961 issue when he wrote, "The basic premise of the Motor Trend Award is that the progress in design recognized must be a distinct advance toward a better car. The Tempest fills this requirement fully." He concluded by saying, "The new Pontiac Tempest sets many new trends and unquestionably is a prototype for the American car for the Sixties."

Werner's comments mirrored the high hopes of many enthusiasts who believed the Tempest was the beginning of a new chapter in the history of the American automobile, one that would pay more attention to balance, efficiency, and the shedding of needless bulk.

The car-buying public responded positively, as well. A total of 100,783 Tempests were built, a respectable start, though well below the figures tallied by the Corvair, Falcon, and Valiant that year. (The Tempest drew the most orders of any of the GM Y-body trio, though.) The slant-four engine was also light-years ahead of the 215-cid V-8 in terms of popularity. Only 2004 '61 Tempests were so equipped, including just three with the manual transmission.

For the 1962 model year, changes to the Tempest were fairly minor and evolutionary. A convertible was added to the line and was available in both Tempest and LeMans trim. The front end was also given a facelift. The split-grille theme was replaced with a new tri-section design that incorporated a Pontiac "arrow-point" crest at its center. The hood was also new, with a "waterfall" design that blended into the center element of the grille.

Engines evolved as well. A new intake manifold for the four-barrel slant-four engine was good for an additional 11 bhp, up to 166 at 4800 rpm, though torque figures remained unchanged. Four-bolt mains were also added to the manual-trans "87Z" engine.

The 87Z was also the basis for a special NASCAR-sanctioned engine available through the Pontiac parts network. It consisted of the four-bolt block plus a head from the 389 Super Duty V-8, a four-cylinder version of the McKellar No. 8 mechanical-lifter camshaft, and an aluminum four-barrel intake manifold that mounted a large Carter AFB carburetor. Pontiac rated the engine at 184 bhp at 5600 rpm, but estimates pegged output somewhere closer to 240 at 6500 rpm, due in large part to the ram effect of the intake manifold.

The 215 V-8 was also more powerful, picking up 30 horses over the previous year for 185 total. On the other hand, the low-compression four with the automatic transmission was cut back to 115 bhp.