The Ford Falcon in Australia 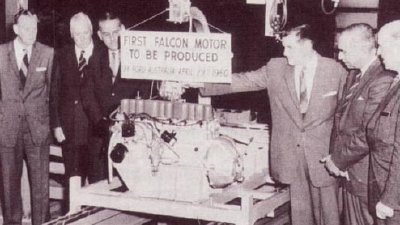 The first Australian-built Falcon six-cylinder engine came off the line in April 1960.

Ford Australia chief H. C. French and then-new Prime Minister Ben Chifley continued to debate over the future of the Ford Falcon. The dreadful irony of all the complex maneuvering was that Lawrence Hartnett was not able to extract the financial commitment he needed from his superiors in New York, who insisted that the money be raised locally. Chifley used his influence to arrange a $2.5 million loan from the Commonwealth Bank to GM-H even though French had been refused government assistance on the very same issue.

Faced with its most serious competitor gaining the upper hand to manufacture in the burgeoning Australian market, Ford was forced to cast around for cars to sell. From England came the small two-door Anglia and four-door Prefect sedans, and the sidevalve V-8 Pilot that was just a tad larger than the Holden. From Ford of Canada came the hunch-backed North American V-8 sedans, followed in 1949 by the more modern spinner-nose Custom sedans that were the first Fords to have a coil-and-wishbone front suspension, but retained the "flathead" V-8 engine.

In June 1950, French retired and was replaced by Charles Smith, an Englishman who had spent much of his working life in Canada and who was posted to Australia from Ford in South Africa. He was a no-nonsense, straight-from-the-shoulder kind of guy quick to assess a need and go at it with all guns blazing. His bosses in Windsor were soon to feel the full brunt of his attack.

Ford Australia was in desperate need of revitalizing, and Smith was determined to challenge GM-Holden's for market supremacy. The Ford plant at Geelong was modernized to assemble the V-8 engine, and in 1952 Smith introduced the most modern postwar Fords yet: the 1.5-liter four-cylinder Consul and the related 2.3-liter six-cylinder Zephyr, both sourced from the UK. The Zephyr was a belated -- and more expensive -- challenger to the Holden, but was moderately successful nonetheless.

Still, Smith kept the pressure on for an "all-Australian" Ford challenger. Eventually, in 1955, the decision was taken to build the Zephyr as a direct challenger to the Holden. Smith negotiated £18.5 million ($37 million) for investments in new assembly and engine manufacturing facilities.

As stylists worked on the Zephyr for Ford, Smith had other plans. Learn how Smith altered the development of the Ford Falcon on the next page.