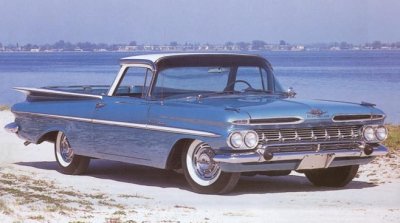 The 1959 Chevrolet El Camino was given a Spanish name, just like its rival, the Ford Ranchero.

The 1959 Chevrolet El Camino was Chevy's eventual answer to the Ford Ranchero. But Ford had a head start with its sedan pickup.

There were marketing challenges brewing that probably contributed to Ford's decision to bring out the car-based Ranchero. During the mid 1950s, sales of "commercial cars" -- typically sparsely trimmed low-line two-door wagons and sedan deliveries -- were generally declining.

Department stores, dry cleaners, florists, and other businesses had long relied on such models for delivery chores. But new suburban shopping centers, increasing numbers of two-car households, and other factors were reducing the demand for home-delivery services. At the same time, four-door wagons were quickly becoming the family wagon of choice. Thus, ideas for new models that could expand volume in the two-door commercial model line were likely to be warmly received.

Regardless of the rationale, it was all but inevitable that Chevrolet would offer a model to counter the Ranchero. In the head-to-head competitive environment of the 1950s, they virtually had to. Why did the Chevrolet response appear two years later? These factors are immediately obvious:

Ironically, by the time Chevrolet unveiled the El Camino (Spanish for "the road"), the full-size Ford Ranchero was already headed for the last roundup. Thus, El Camino and Ranchero would compete directly in only the 1959 model year.

Chevrolet chose to market the El Camino as part of its truck line (as Ford did with the Ranchero). Gentleman farmers, construction foremen, and others with generally light-duty rural or suburban hauling needs were targeted in advertising and marketing materials.

Still, introductory sales literature proclaimed, "In both appearance and performance, Chevrolet El Camino offers the best qualities of a fine passenger car." Though certainly true from the performance perspective, there were limitations to the appearance, at least from the factory.

For more detail on the El Camino's styling, continue to the next section of this article.