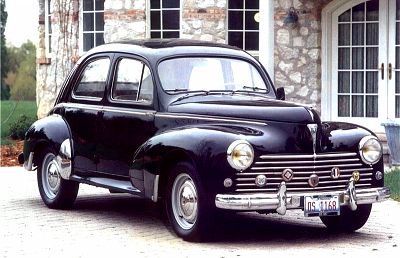 Since their inception in France in 1889, Peugeot automobiles -- like this 1957 Peugeot 203C four-door sedan -- have fanned out around the globe. For a time, one of the places they could be found was the United States, where a Peugeot even became a part of popular culture. On the television series Columbo, the rumpled police detective title character drove a tatty 403 convertible.

If the 1957 Peugeot 203C sedan featured here draws a blank with Americans, even those familiar with European cars, that's understandable. It dates from the year before Peugeots were first formally imported to the United States (though small numbers of them had trickled in prior to 1958).

The unit-bodied 203 saw few changes to its basic design. Styling had something of a 1940s Chrysler look to it. Chrome bumpers were added in 1952. In 1954, the rear window was enlarged and the fuel filler was hidden in the right rear fender.

Power came from a 1.3-liter ohv four with hemispherical combustion chambers that was good for about 42 horsepower. The engine was hooked to a four-speed manual transmission with an overdrive top gear.