Features of the 1957 Pontiac Bonneville 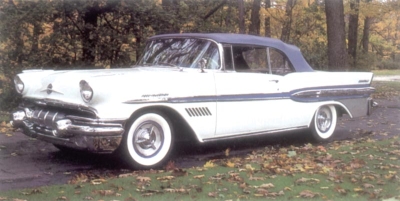 One of the main features of the 1957 Pontiac Bonneville was its power. Pontiac's air pipes were longer (close to 12 inches), ostensibly for better "ram effect" at high rpm. Division press blurbs stated that the fuelie gave "maximum economy and performance in the normal driving range." In other words, it was designed more for maximum low- and mid-range torque than top-end power.

Pontiac was initially quite coy on the subject, implying, as Dunne and Norbye quote, "that there is so much power it really cannot be talked about openly." But eventually the division got down to cases, stating output as 310 horsepower gross at 4,800 rpm and 400 pounds-feet torque at 3,400.

Still, one of the light 1957 Chieftains with Pontiac's triple-two-barrel "Tri-Power" carburetion could beat the fuelie by more than a second in the quarter-mile, though the Bonneville's status as the heaviest model in the line -- a substantial 4,285 pounds at the curb -- had something to do with that.

Curiously, the injected car was allegedly thriftier than any carbureted Pontiac but, at 1957 gas prices, you'd need at least a lifetime to recoup the fuelie's extra cost. Magazine types averaged 17-18 miles per gallon, way under the 20.4 mpg achieved by Pontiac's "official" entry in the Mobil Economy Run, but not bad all things considered.

And so was the performance, even if it was inferior to the Tri-Power Chieftain's. Motor Trend magazine observed that "the Bonneville needed a consistent 18 seconds" in the quarter-mile, then reluctantly concluded that "so far, the present production of FI does not substantiate implications that bolt-on fuel injection alone is responsible for substantially improved acceleration."

Pontiac likely didn't care. Knudsen said the Bonneville was "the car I was counting on to bring the new message to the public. And it did. I remember sitting in the grandstand at Daytona with my wife, watching it at its first race. Somebody in the stands shouted, 'Look what's happened to Grandma!'"

That was in February 1957, when the Bonneville hit the showrooms. Two months later, the Automobile Manufacturers Association issued its famous "ban" on factory-sponsored racing and performance promotion. Pontiac went underground, along with its sister General Motors divisions, while Ford and Chrysler temporarily withdrew. But it didn't matter. The first production Bonneville had done its job.

To follow the story with the 1958 Pontiac Bonneville, continue to the next page.