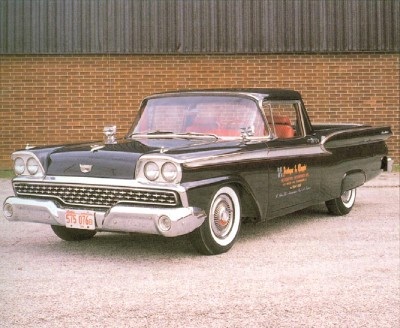 All 1959 Rancheros were Customs, which means they got a single beltline chrome strip. That didn’t mean, however, that they couldn’t be dressed up.
buihb

The 1959 Ranchero stood as a major design improvement to most eyes, yet it isn't nearly as popular today as the 1957. The 1959 Ford line can perhaps best be described as the McNamara Ford -- like Ford's president at the time, it was the "square American." On the other hand, George Walker picked the 1959, along with the 1949, as his two best designs. Actually, Walker didn't personally design either model, but he did head up the styling department. Under him, Joe Oros penned the 1959 Ford. In its day, the 1959 was considered by many to be the most beautiful Ford ever built, and it was in fact awarded the Gold Medal for Exceptional Styling at the Brussels World Fair.

So heavily facelifted as to look all-new, the 1959 was highlighted by a 20-percent larger compound-curve "Safety-Vision" windshield, a star-studded grille, plus huge round taillamps set into even huger aluminum reflective saucers. The last were topped by the backup lights, which were the end point for jet tubes and tiny fins that started just aft of the doors. Ford offered only one chassis for 1959, the larger 118-inch unit. At mid-year, the Galaxie took over as the top-line series, boasting a special interior plus a Thunderbird-style flat rear window and roofline.

On the engineering front, frames were wider, heavier, and stronger for 1959, with side rails bowed out almost to the outer limit to allow for more passenger room. There were also a number of suspension improvements, all directed to a softer ride. The Fordomatic transmission was completely redesigned to be lighter and simplified with 105 fewer parts. It sold for less than the older version, but had only two speeds forward. Cruise-O-Matic was only slightly modified, and both automatics now placed the selector quadrant on the steering column rather than in the instrument panel. That panel, incidentally, was also completely redesigned. The parking brake was finally foot-engaged, though it had to be released by hand.

The Ranchero was touted this year as "America's first work or play truck" -- an obvious dig at the upstart El Camino. As in 1958, the Ranchero adopted most 1959 Ford changes, but the base model was discontinued, leaving only the Custom. A Country Sedan wagon interior and base exterior car trim marked the 1959 model, whose price had crept up to $2,313. For that money, the longer wheelbase allowed for seven more inches of load space, a nominal seven feet that "means bigger load space for your cargo, be it pails or sails, or hay by the bales." Once again, Colonial White was offered with a variety of other colors, or one could choose from 10 monotones.

After 1960 the Ford Ranchero wasn't much of a hit.
bviub

Befitting an improved economy and more tasteful styling, Ranchero production rebounded to 14,169 units for 1959, in spite of the El Camino. The year was also significant because it would be the last year of the full-size Ranchero. In Australia, the 1956 models were continued through 1958, and the 1959 Fords, which were marketed there for three years, didn't prove at all popular. For 1960, the Ranchero was downsized and absorbed into the Falcon line. It was an immediate hit -- both in the U.S. and in Australia, where it was slightly changed and still called the Utility. The Ranchero remained a Falcon, Fairlane, or Torino for the rest of its life. But after more than 20 years of production, the Ranchero finally fell victim to the increasing popularity of small import and domestic trucks with fancy trim -- not to mention Ford's switch to front -- drive car platforms. The 1957 Rancheros are good collectibles today, but they're not hot items. The 1958s and 1959s are a bit iffy, yet worth buying for their combination of utility value and good Fifties design.

The Aussies had a winning idea all along.