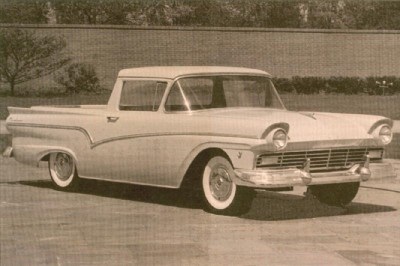 Ranchero Customs could be two-toned in 1957, and many were. White was the color seen on the upper bodysides, hood, and window pillars, with the contrasting color featured above and below.
bguigh

To understand the 1957 Ford Ranchero, you need to understand the history of pickups -- which is filled with riddles. During the Thirties, the stylish Hudson and Studebaker sedan-pickups could work all week, and then go to church or the country club. Kaiser-Frazer tried something similar in the late Forties/early Fifties with its dual-purpose Vagabond utility sedans with hatchback-style rear openings. But none of them were terribly successful, so American pickups remained plain Jane commercial vehicles until 1955.

The breakthrough to high-style pickups came with the 1955 Chevrolet Cameo Carrier and its companion, the GMC Suburban. These were colorful two-tone jobs with lots of bright trim and chrome bumpers, plus interiors that were as colorful and fashionable as those in the all-new Chevy Bel Airs. The box was a slabside that came all the way out over the fenders flush with the cab, and was made of fiberglass.

While buyers didn't exactly flock to the showrooms like fans to a Buddy Holly concert, sales were encouraging enough to convince Ford management that there was at least a small market niche for a pickup in a Sunday suit. The most expedient way to answer GM, Ford reasoned, would be to give the Ute U.S. citizenship.

In discussing the 1957 Ranchero, it must be treated as an integral part of the Ford station wagon lineup. Included were three two-door models: Courier Sedan Delivery, Ranch Wagon, and the more deluxe Del Rio. Four-door offerings comprised six-and nine-passenger Country Sedans and the woody-look Country Squire. The two-door-based Rancheros were marketed through the Ford Truck Division, which had been selling Couriers all along. The wagons, and therefore the Ranchero, were built on Ford's shorter 116-inch wheelbase shared by Custom and Custom 300 models, while the more upmarket Fairlanes and Fairlane 500s rode a 118-inch stretch.

The reasoning behind the wide choice of wagons and utility vehicles was this. Beginning with the 1952 models, Ford set out to own the U.S. wagon market (like it had prewar), even though it was three years later than the competition with all-steel bodies, and hadn't offered a four-door from 1949-1951. Still, the division quickly overtook both Plymouth and Chevrolet, and by 1954 Ford was clearly America's wagon master. Production that year shot up to over 141,000 wagons, 112,000 more than in 1951 when only the two-door Country Squire woody was offered -- and two and a half times Chevrolet's wagon output.

Close to 60 percent of Ford's 1954 wagon production consisted of the low-end Ranch Wagons, and to that could be added the modest figure for the Courier. In any case, the bottom line looked attractive enough to spur Ford to add the Ranchero derivative to the lineup in the fall of 1956 as a '57 model.

A late styling buck of the 1957 Ranchero accurately reflects the production vehicle except for the 1955-1956 hubcaps and Y-8 emblem.
bujb

Being a 1957 Ford, the Ranchero was part of the most changed Ford passenger car/wagon lineup in the company's history, with the possible exception of the Model A and the 1949 models. "The 1957 Ford does not look like much now," recalls veteran Ford stylist Bill Boyer, but "it was a highly advanced car at the time. It set a lot of new themes. It was not influenced by the Edsel. The Edsel, instead, was derived from both the Ford and Mercury, which was a mistake." While Boyer didn't style the 1957 Fords, he did work on the design of the Mystere show car-a dream car that predicted so many 1956-1957 Ford styling themes that its intended 1955 showing was delayed for a year.