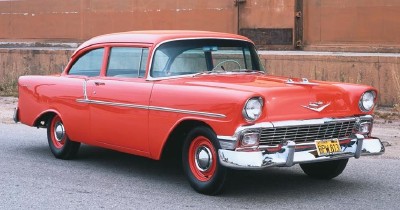 The 1956 Chevrolet One-Fifty was a no-frills  speed and performance. See more pictures of classic cars.

The Chevrolets of 1955-1957 have long been darlings among car enthusiasts for their iconic styling and legendary small-block V-8s, and the 1956 Chevrolet One-Fifty is an interesting example.

As is typical of most 1950s and 1960s collector cars, the most sought-after models are top-line, heavily optioned con­vertibles and two-door hardtops. Today, most Chev­rolet collectors fawn over glitzy, two-toned Bel-Airs festooned with plenty of flashy factory accessories.

However, not every new Chevrolet shopper in the mid-1950s was swayed by fender skirts, bumper guards, tissue dispensers, signal-seeking radios, or Autronic Eye headlamp control. Some buyers just wanted to go as fast as possible for as little money as necessary, and were willing to forego creature comforts in the pursuit of speed.

The age-old recipe for going fast on the cheap hasn't changed much over the years: Simply drop the hottest engine into the lightest, cheapest body available, and hold the frills. The 1956 Chevrolet One-Fifty shown here is a textbook example of the perfect budget bomb.

With a 3,117-pound curb weight and a $1,734 base price, the One-Fifty two-door utility sedan was the lightest and least-expensive model Chevrolet offered in 1956. A single chrome side spear (a new embellishment for the series) and small hubcaps highlighted its austere exterior trim. Interior accoutrements were equally Spartan: rubber floor mats; a single sun visor; and no radio, heater, or clock.

The rear windows were fixed -- who needs roll-down rear windows with no back seat? The utility sedan featured a 31-cubic-foot cargo area lined by "dur­able composition-board loadspace walls" behind the single split-bench seat.

While most 1956 Chevrolets were available in an array of interior color choices, One-Fifty sedan buyers had no options; a beige and gold-striped vinyl with golden-flecked black pattern cloth was the sole trim combination.

The Chevrolet small-block V-8 was already well on its way to becoming a performance legend when the 1956 models were introduced.

Chevrolet engineers did a little hot rodding of their own when the Corvette dual-four-barrel 265 was made available as an across-the-board option midway through the 1956 season.

With the first of the famous "Duntov" cams, dual four-barrel carbs, lightweight valves, and larger intake and exhaust ports, it was good for 225 bhp at 5,200 rpm. The Carter carburetors were topped with a large "bat­wing" air cleaner from which hung two oil-bath air filters.